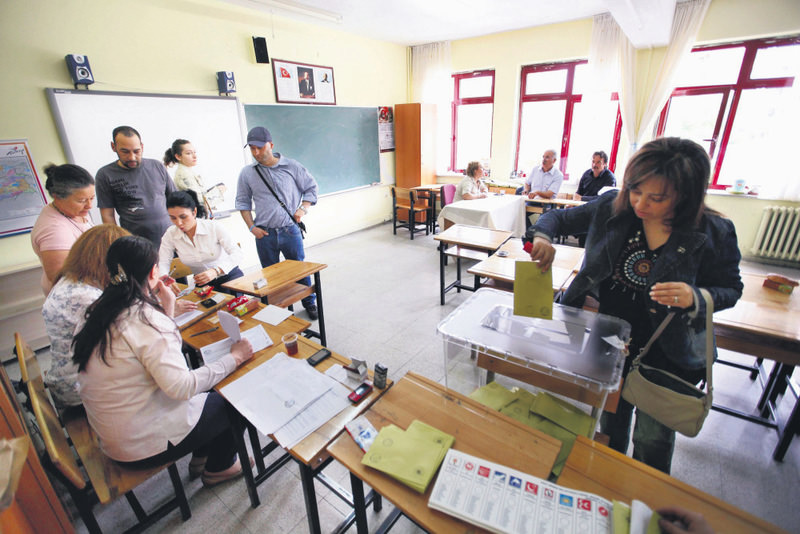 The latest surveys show that support for the ruling AK Party is above 45 percent with pro-Kurdish HDP below the 10 percent threshold. Seventy percent of participants in a survey stated that they favor a single party gov't for a stable Turkey

With less than a month left until Turkey's June 7 general elections, the latest public surveys indicate the Justice and Development Party (AK Party) is to rule the country for another term. According to a survey conducted May 3-7 by the Denge research company with 5,073 people in 25 districts, the AK Party will obtain 45.6 percent of the vote. The Ankara-based Objective Research Center (ORC) also conducted a survey in 36 districts from May 4-7 through Computer Assisted Telephone Interviewing (CATI) among 2,450 people. The ORC's latest survey found 47.5 percent of respondents will vote for the AK Party.

The recently conducted poll by Denge indicates low support for a coalition government, finding that nearly 70 percent of respondents support a single party government. Additionally, while the survey shows strong support for the AK Party, the owner of Denge, Hasan Basri Yıldız, said they found an increase of support for the main opposition Republican People's Party (CHP) and a decrease for both the Peoples' Democratic Party (HDP) and Nationalist Movement Party (MHP). Similarly, the ORC survey also found that the pro-Kurdish HDP would not pass the 10 percent election threshold with 8.1 percent of respondents supporting the party.

Although the HDP has reportedly shifted its strategy for the elections with aims to obtain conservative votes, the surveys indicate that the HDP is experiencing a regression of support. Yıldız underlined that with Demirtaş targeting the Presidency of Religious Affairs (DİB) and saying he will disband the institution if elected, may be the cause behind such a decline in support.

Furthermore, President Recep Tayyip Erdoğan and Prime Minister Davutoğlu as well as many other AK Party officials have been reiterating the necessity of a new constitution, which 76.5 percent of the public also believes. Erdoğan continuously says that a new constitution is a must for a new Turkey. A constitutional amendment or a new charter is needed to set up a presidential system that Erdoğan wants. The country's current Constitution was drafted two years after a military takeover in 1980 and numerous amendments have been made to it since then.
Last Update: May 12, 2015 10:19 am
RELATED TOPICS