Demirtaş vows to resign if HDP falls below 10 percent 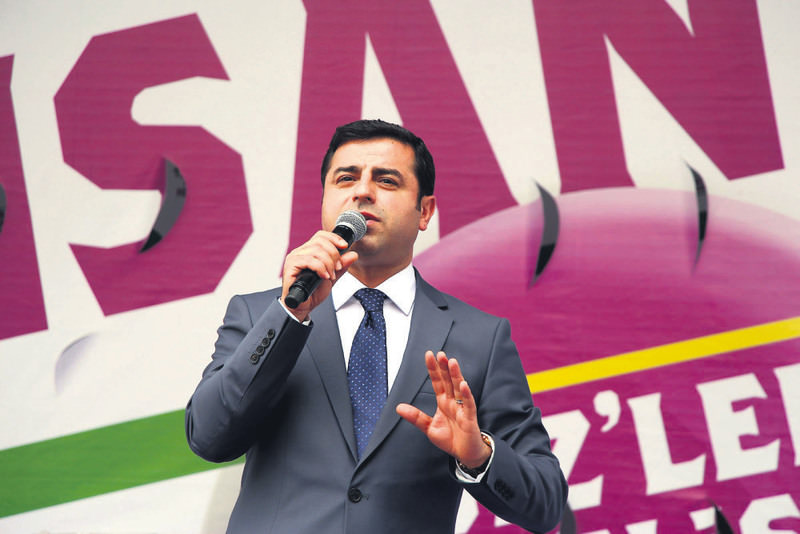 by Merve Aydoğan May 13, 2015 12:00 am
Pro-Kurdish Peoples' Democratic Party (HDP) Co-Chair Selahattin Demirtaş said on Wednesday that he will resign from his post if his party fails to pass the 10 percent election threshold in the upcoming general elections to enter Parliament.

Speaking on a news channel, Demirtaş was asked if he would take the same step as British opposition party leaders in the case of an election failure. "If we fail to get enough public support, then this is a shortcoming [of our politics]. As co-chair of my party, if I fail to convince the public, if my party fails to pass the threshold because of me, then I will leave my post on the night of June 7," he said.

Recently conducted public surveys by companies such as GENAR and the Objective Research Center (ORC) have reported that the HDP is unlikely to pass the election threshold with support around 8 percent to 9 percent.

With the possibility of the HDP passing the election threshold continuing to top Turkey's political agenda, the Ankara-based think tank Foundation for Political, Economic and Social Research (SETA) organized a panel on Wednesday to discuss the HDP's election strategy. In efforts for the HDP to become part of Turkey and embrace all citizens in the country, panelists have underlined that the HDP is going through an identity transformation. The panel, with the participation of Vahap Coşkun, an associate professor at Dicle University in Diyarbakır; Bekir Berat Özipek, a professor of political science at Istanbul Commerce University and GENAR head Mustafa Şen, began by discussing Coşkun's recently published analysis of the HDP for the June 7 general elections.

Coşkun has underlined that voter turnout will determine the HDP's likelihood of passing the threshold. Commenting on the two main reasons the HDP entered as a party to compete in the upcoming elections, Coşkun said: "One of the reasons is the identity transformation of the party, which has always claimed to be leftist, but at same time said to protect the rights of all groups, however it is still known as a Kurdish party. Thus, toward the elections, the HDP has begun a process that could be defined as becoming part of Turkey. The second is the HDP's aims to reach out to other groups in Turkey."

Similarly to Coşkun, Özipek also emphasized that the "HDP being unable to pass the election threshold will be perceived by the party as its own failure of policy."
Last Update: May 14, 2015 10:34 am
RELATED TOPICS