Turks in U.S. start casting their ballots for general elections 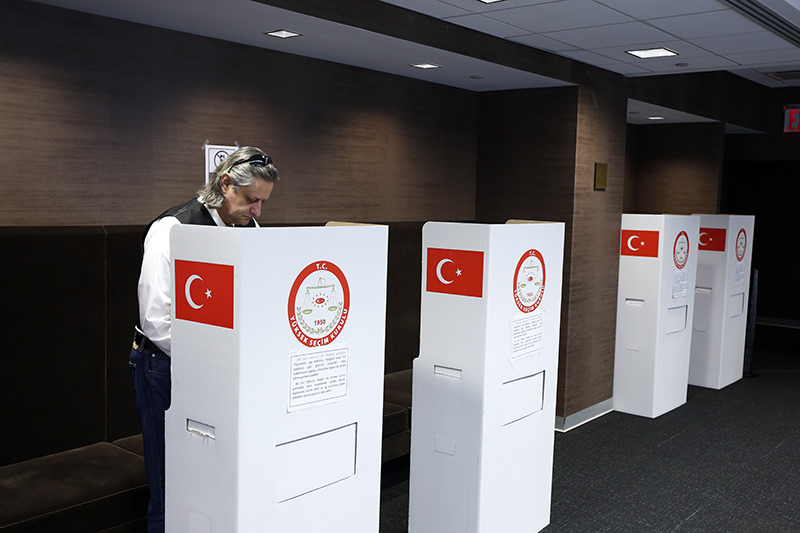 | AA Photo
by Anadolu Agency May 17, 2015 12:00 am
Turkish citizens in the U.S. began voting at polling stations set up inside the Turkish embassy and consulates Saturday to participate in their country's general election that officially begins on June 7.

Along with the U.S. capital, Turkish citizens will vote in New York, Los Angeles, Chicago, Houston, Boston, Miami until May 31, 7 p.m., local time.

Hasan Kocahan, who was the first to vote in Washington D.C., had traveled all the way from Florida, where he was registered as a voter.

"I am happy to be the first in the line," Kocahan said, adding that: "I thought there will be a long queue, but I ended up being first."

Serdar Kılıç, Turkey's ambassador to the U.S., called on Turkish citizens to participate in the elections by casting their vote at the nearest polling station.

"We are expecting a high number of participants for the election," Kılıç said.

According to Turkey's Supreme Election Board, 112 polling stations would be set up for almost three million Turkish nationals living abroad.

"No one should doubt the security of the votes," İbrahim Uyar, Washington representative of ruling Justice and Development or AK Party, said.

According to Uyar, the votes at the consulates and embassy would be secured in a room with three different locks; only one key to a unique lock would be given to each of the three party representatives, including the AK Party, Republican People's Party (CHP), and Nationalist Movement Party (MHP). The room's door would only be unlocked when all three keys are used together, he added.

Yurter Özcan, CHP's U.S. representative, also said that no one should be worried about the security of the votes and called on Turks living in the U.S. to participate in the process.

Voting has also started in the Turkish consulate in New York where more than 34,000 eligible voters are registered in the states of New York, New Jersey, Delaware and Pennsylvania.

The June elections will elect 550 members of Turkish parliament from 20 political parties. This will be the country's 25th general elections.

More than 84 percent of the electorate went to the polls in the 2011 general election, according to the report comparing turnout rates in Organization for Economic Co-operation and Development member states.
Last Update: May 17, 2015 2:40 pm
RELATED TOPICS