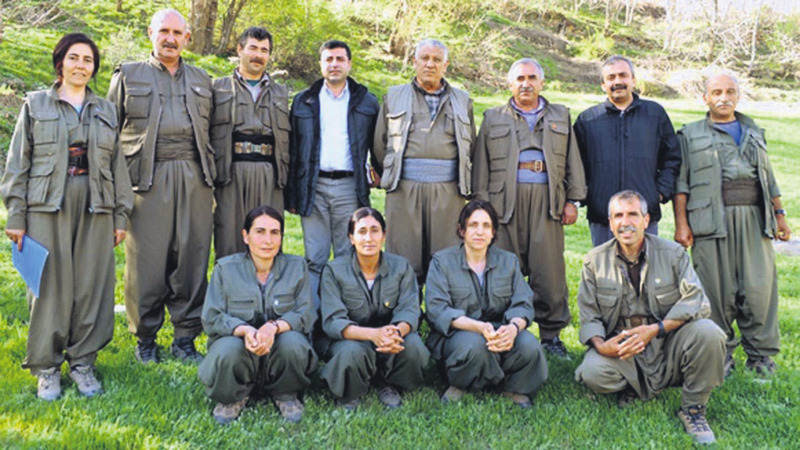 Fiie photo of a HDP delegation visit to senior KCK members at the organization's hideout in northern Iraq.
by Sena Alkan May 19, 2015 12:00 am

Deputy PM Akdoğan criticized the HDP and said it will not be able to contribute to democracy as long as it stays under the tutelage of the PKK, which resists its leader's call for disarmament

Deputy Prime Minister Yalçın Akdoğan said in a speech at an opening ceremony in Istanbul that the pro-Kurdish Peoples' Democratic Party (HDP) will not be able to contribute to democracy as long as it is under the tutelage of the outlawed PKK.

"They visit the Qandil Mountains [where the PKK headquarter is located] frequently. How does strengthening a political party whose deputy candidate list is determined by a terrorist organization, a political party that is reprimanded by a terrorist organization contribute to democracy?" Akdoğan said, accusing the HDP of being under the shadow of PKK, which took up arm against Turkey in the 1980s to carve out an independent state in southeastern Turkey.

He added that blackmail and threats in the region do not comply with democracy and asked how many votes the HDP would be able to garner if the PKK laid down its arms.Noting that the most trustworthy side in the reconciliation process between Ankara and the Kurds is the Justice and Development Party (AK Party), he asked who would be able to continue the process when something bad happens to the AK Party: "Who will continue the process? The Nationalist Movement Party (MHP), Republican People's Party (CHP) or the HDP? [You should know that] the reconciliation process is only with the AK Party."

Accusing the HDP of being a pawn, Akdoğan said on the Kurdish issue, the only thing the HDP does is sabotage the reconciliation process. He said: "They frequently say the process is over, the process is suspended. The PKK does not want to lay down its arms. The HDP does nothing but chock the process. They [HDP] support none of our steps."

Bringing up the Oct. 6-7 Kobani incidents in eastern Turkey that morphed into violent clashes between pro- and anti-PKK groups in which dozens of people lost their lives, Akdoğan said HDP Co-Chair Selahattin Demirtaş called on people to take to the streets while Kobani was besieged by the Islamic State of Iraq and al-Sham (ISIS).

"Did he [Demirtaş] turn into a more democratic politician when he garnered more than 9 percent of the vote [in the presidential election]? Only after two months, he called on people to take to the street, called for a social riot. Is there any guarantee that he will not do the same if the HDP passes the 10 percent [election threshold] in the upcoming elections?" he asked, adding that the HDP behaves as a pawn of the PKK.

He also accused the HDP of cooperating with the Gülen Movement, which is accused of infiltrating key state institutions in an attempt to overthrow the government.

Recently, Kurdish Communities Union (KCK) Co-Chair Bese Hozat accused the government of not taking the steps agreed to on the reconciliation process and claimed that the government has "[failed] to take the process forward," on a pro-PKK Med Nuçe TV program, which broadcasts from Europe. "Convening the congress [for disarmament] is not our agenda now since the [reconciliation] process has not worked and no steps have been taken," Hozat asserted.

She said the PKK will not convene the congress if Kurdish identity is not acknowledged and if the current Constitution is not changed, unlike the KCK's latest statement in which it did not demand changes to the Constitution, but a step to be taken for it to take action.

Calling Hozat's remarks "trickery," Akdoğan asked: "If you were going to hold the congress, what stopped you?"

Accusing the PKK of lying in reference to its plans to hold the congress in April or May, Akdoğan said: "Parliament is closed ahead of [the June 7] general elections. How will it be able to change the Constitution when it is closed? Is this trickery?""This is not a process that you can force to change with guns in your hand. The reconciliation process does not work with blackmail. This government will only do what the nation says," Akdoğan said, directing his statement to the PKK. He added that those who hold arms have no right to talk about democracy. Akdoğan also accused the HDP as well as the PKK and KCK of conducting policies through threats and creating tension between Turkey's people. "First, lay down the guns, and say, 'We do not accept a method based on killing.' Then go anywhere in Turkey and try to receive the nation's support for the parliamentary elections," he said.

The reconciliation process was on the brink of reaching a conclusion when imprisoned PKK leader Abdullah Öcalan announced in his Nevruz message in March this year that it was time to lay down weapons and continue the cause democratically. The reconciliation process, however, which seemed to have been finally cemented after numerous provocations, was crippled again after a recent attack in Ağrı. During a visit to the southeastern province of Mardin on Monday, President Recep Tayyip Erdoğan said the government took the necessary steps in the reconciliation process, but the PKK and HDP failed to keep their promises.

The PKK took up arms against the Turkish state in 1980s to carve out an independent Kurdish state in the east. It is listed as a terrorist organization by Turkey, the EU and U.S. The government launched the reconciliation process in 2013 to end the long-continued Kurdish conflict, which has led to the deaths of nearly 40,000 people.
Last Update: May 19, 2015 10:40 pm
RELATED TOPICS