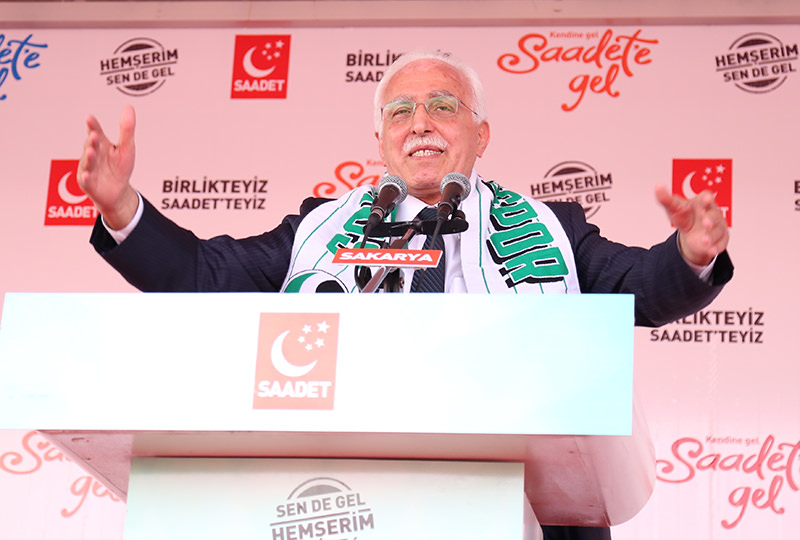 | AA Photo
by Nurbanu Kızıl May 20, 2015 12:00 am
Mustafa Kamalak, the chairman of the right-wing Felicity Party (SP) has claimed that the main opposition Republican People's Party (CHP) has copied the SP's election discourse in their slogan and harshly criticized a former member for his contribution to the duplication.

"For 40 years, we have been saying that we want a livable Turkey" said Kamalak, speaking at his party's election rally in the city of Sakarya on Tuesday. He noted that the CHP's election slogan is the same as what they have been promoting for the past four decades.

"We know very well who made the suggestion, greetings to Bekaroğlu" Kamalak said, criticizing former SP member Mehmet Bekaroğlu who joined the CHP in September. He stated that duplicating someone else's slogan alone will not be sufficient: "You need to have a conscience, love for the nation, enthusiasm and faith."

The CHP uses "A Liveable Turkey" (Yaşanacak bir Türkiye) as the main slogan of its election campaign.

The party's election campaign has also received criticism from Cem Uzan, the chairman of Young Party (Genç Parti) who claimed it was a duplicate of his own campaign for the 2002 general elections. The CHP has used the same publicist as Uzan's Young Party, and both campaigns share common populist themes including cancelling some taxes, setting the diesel oil price for farmers at TL 1 (Young Party) and TL 1.5 (CHP).

The CHP was shaken with an internal crisis when Mehmet Bekaroğlu, who was a member SP, transferred to the party and became a co-chair. Bekaroğlu's inclusion in the party was made through controversial means as he was added to the party through the female quota, contravening the party statute.