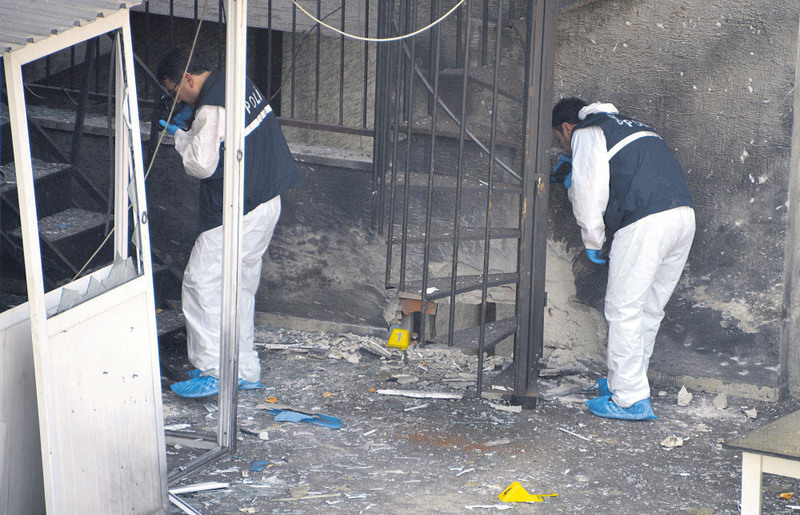 Criticizing HDP Co-Chair Selahattin Demirtaş for accusing the ruling party of being behind the explosions at the two HDP provincial headquarters in southern provinces, Prime Minister Ahmet Davutoğlu said the terrorist DHKP-C was responsible for the attack

Following Peoples' Democratic Party (HDP) Co-Chair Selahattin Demirtaş's accusations of the ruling party regarding the simultaneous explosions at two HDP provincial headquarters in the southern provinces of Adana and Mersin, Prime Minister Ahmet Davutoğlu criticized Demirtaş and said the attacks were carried out by a Revolutionary Peoples Liberation Party-Front (DHKP-C) terrorist.During his rally in the northern province of Sinop on Thursday, Davutoğlu said the perpetrator of the attacks against the HDP offices has been identified and the suspect had previously been involved in activities with the DHKP-C, which is known for deadly terrorist attacks, including the bombing of the U.S. Embassy in Ankara and the murder of a prosecutor in Istanbul's Çağlayan Courthouse in April.

The Interior Ministry also released a statement on the attacks on the HDP and said the suspect was imprisoned in 2007 for involvement in illegal activities in Ankara and was also detained in different cases in following years.

During a speech in Ankara on Wednesday, Davutoğlu said Demirtaş's statements aim "to instill hatred and divergence in the elections" by blaming the government for the provocative attacks. Meanwhile, opposition parties, including the HDP, have tried to exploit the attacks to score points against the government by blaming it.Davutoğlu strongly condemned the attacks on HDP provincial headquarters and emphasized the recent attacks were merely incendiary.

He also criticized all political parties for not releasing any statements condemning the attack on the AK Party office in the eastern province of Batman and the shooting at AK Party Mayor Cüneyt Yıldız's office, which severely injured him. Davutoğlu said he has received a comprehensive briefing from the Interior Ministry and added that the ministry has identified the perpetrators of the HDP office bombings.

"Those who are behind these recent attacks have clearly displayed what they are aiming for. Once the perpetrator of the HDP bombings is arrested, would those who have tried to exploit the attacks to score points against the government apologize to us?" Davutoğlu said. He also spoke of Demirtaş's stance throughout the events and said he has only displayed an approach that tries to insert hatred and divergence in the elections. With only 15 days left until the June 7 general elections, the recent attacks raised concerns about pre-election violence. In this regard, such concerns have intensified especially with the recent reports of the PKK threatening locals in southeastern Turkey where the organization urged them to vote for the HDP.

Recent reports have said the PKK sent letters to homes in predominantly Kurdish populated regions in southeastern Turkey threatening people to cast their votes for the HDP, which regularly sends delegations to meet senior PKK members in northern Iraq.

Although the government is maintaining its devoted efforts to push the reconciliation process forward with strong displays of determination to bring peace and to resolve the Kurdish question, Demirtaş recently said the reconciliation process is currently on ice and the PKK leadership in the Qandil Mountains, where the PKK's headquarters are located, are using tactics to delay the establishment of a committee to lay down arms. Davutoğlu further stressed on Wednesday that the AK Party will not allow any sort of chaos or violence to occur in the country.

Davutoğlu also addressed the "parallel structure," what the government calls the Gülen Movement, and said: "Although it seems as if there are only three opposition parties against us [the AK Party], there is also the 'parallel structure.' Four of those faulty structures are trying to eliminate the only righteous structure, the AK Party." Davutoğlu confirmed that he is quite sure about winning the upcoming elections. A survey conducted on May 4-7 by the Ankara-based Objective Research Center (ORC) indicated that 47.5 percent of respondents would vote for the AK Party.
Last Update: May 21, 2015 11:48 pm
RELATED TOPICS