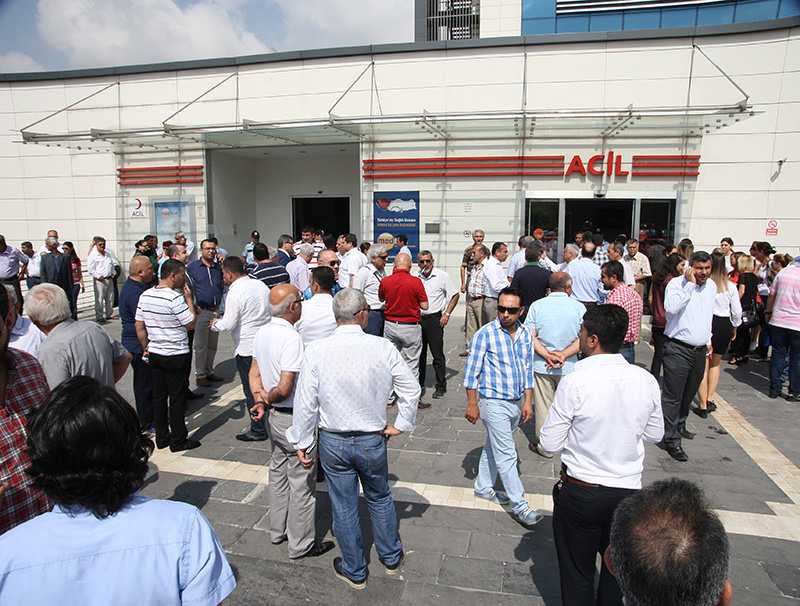 Turkey's opposition party CHP members in front of the hospital to which the wounded MP Elif Dou011fan Tu00fcrkmen was transferred to following the shooting incident on May 26, 2015 (AA Photo)
by Daily Sabah May 26, 2015 12:00 am
A parliamentary candidate from the main opposition Republican People's Party (CHP) was wounded in an armed attack in the southern province of Adana early Tuesday.

Elif Doğan Türkmen, a CHP deputy candidate who was attending a brunch meeting at a restaurant, was wounded in an armed attack and was transferred to a hospital following the incident.

Mustafa Büyük, the governor of Adana, has said that Türkmen was shot in the knee and that her injuries were not life threatening. He also said that the car that was used by the assailant or assailants in the attack was found abandoned.

A man named Ali Fuat E. is a suspect in the attack, the governor said, and added that the armed attack on Türkmen was not politically motivated, but was rather a lawyer-client dispute.

An investigation has been launched, according to reports.
This is the second time Adana has witnessed an attack on a parliamentary candidate in four days. On May 23, Justice and Development Party (AK Party) candidate Ramazan Demir was also injured in a knife attack by two attackers.