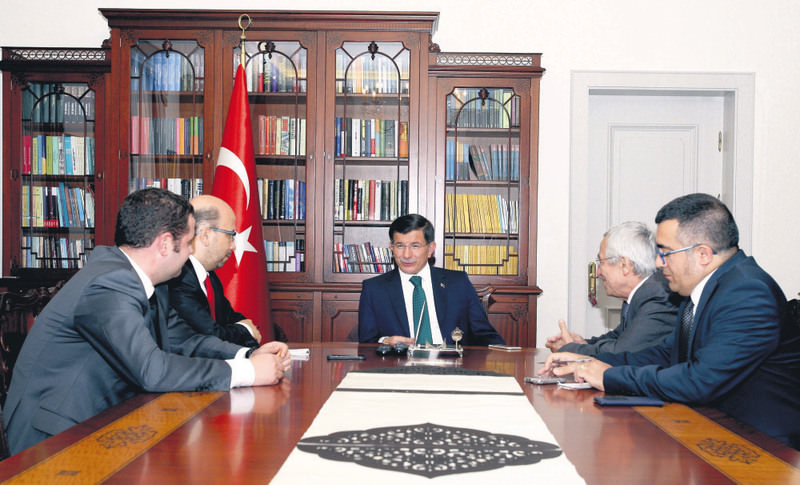 Although differing in ideology, anti-government circles have united to turn the public against the AK Party in the run-up to the June 7 elections in a move that has been harshly criticized by Ankara, which warns against polarization that could be created by such an alliance

Prime Minister Ahmet Davutoğlu said some circles including the pro-Kurdish Peoples' Democratic Party (HDP), certain leftist media outlets, the main opposition Republican People's Party (CHP) and the Gülen Movement have allied to bluntly engender polarization in the country. In an exclusive interview with the Turkish daily, Sabah, Davutoğlu explained what he called "organized works" by anti-government circles to overpower the ruling party in the upcoming June 7 general elections. Underlining that these circles have nothing common other than their purpose of enhancing their ability to beat the Justice and Development Party (AK Party) in the elections, Davutoğlu said they have resorted to means to create a perception that will only lead to a polarized society. However, Davutoğlu said the Gülen Movement, which considers the government its foe since it began curbing its alleged illegal activities within key state institutions, has lost its power of influence.

"It is hard to say that decades of accumulated influence broke after a couple of moves, but their ability to manipulate the bureaucracy and conduct illegal activities no longer exists. We are in control of the situation," Davutoğlu said.

He also touched on security issues that emerged predominantly in the eastern provinces of the country, saying there are attempts to pressure locals in the east.

The HDP has recently been accused of forcing locals in the east to vote for them. There are reported incidents in which people in the east have been threatened both verbally and physically ahead of the June elections to vote for the HDP.

Amid these developments, Davutoğlu assured that intense security measures will be taken at the ballot boxes for the elections and that there was no need to worry.

"There is open control. Everything is in sight. There is an observer from each party at the ballot boxes. The top election board in not under the sway of the government. I wanted to hold a rally in Tunceli, but the venue we asked for was not permitted by the body and I concurred with it," Davutoğlu said, adding that it has to be respected whatever the election results are.

Davutoğlu's election campaign has emphasized the developments Turkey has undertaken and conveying a message that he will increase the level of development, hoping voters will continue to support the AK Party in the upcoming elections. A new constitution and switching to a presidential system have been the top two topics of AK Party's campaign trail.

Taking into consideration the tone Davutoğlu adopts during his rallies, it would not be wrong to say that he uses criticism against the opposition parties as part of his election strategy. This tactic, common to all parties, has intensified as the elections draw nearer. Davutoğlu's main target in his criticism is the HDP and CHP. He castigates the two parties for what he calls their "anti-religious" election promises, one of which was a vow to shut down the Presidency of Religious Affairs (DİB). What looks like a strategy to garner votes from the Alevi community, which is not willing to be attached to the political body, was criticized not only by Davutoğlu, but also President Recep Tayyip Erdoğan during his speeches at inauguration ceremonies. The rhetoric of the parties went further when HDP Co-Chair Selahattin Demirtaş said Taksim Square is to workers what the Kaaba is to Muslims.

The HDP, which is vying to pass the 10 percent election threshold to enter Parliament, has recently adopted a democratic tone to expand its reach. However, this too has been criticized by government officials who accuse Demirtaş of posing as an advocate of democracy on one side and backing the armed struggle of the PKK and triggering violence in the east on the other.

Davutoğlu also targeted CHP Chairman Kemal Kılıçdaroğlu for forming an alliance with the HDP, which he says is a move merely for the purpose of enhancing their ability to beat the AK Party in the elections. The parties in question also lean toward the possibility of a coalition in case neither party gains sufficient votes to lead as a single party.

However, AK Party officials, confident that the party will secure enough seats to lead alone, have outspokenly said they are against coalitions. Davutoğlu along with Erdoğan have been speaking about the negative aspects of coalition governments by giving examples from Turkey's history as well as the benefits of shifting from the parliamentary to a presidential system.
Last Update: Jun 03, 2015 1:56 pm
RELATED TOPICS