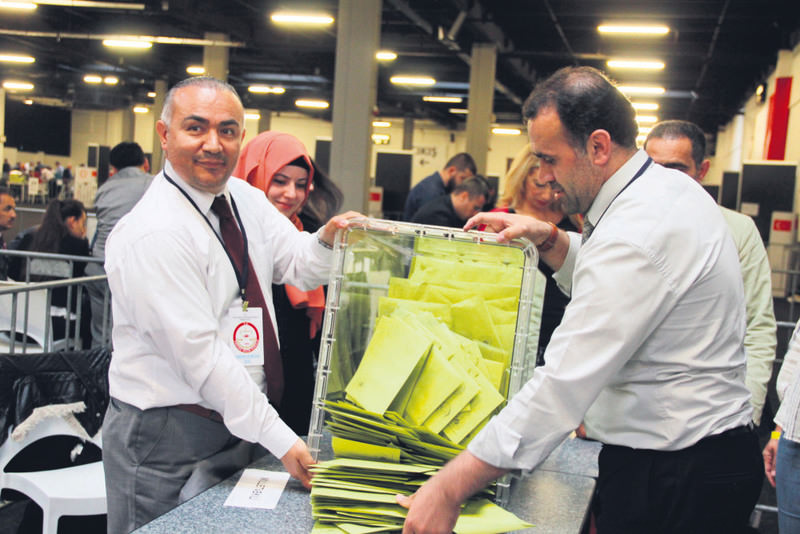 Photograph shows casted ballot papers at a polling station in the Netherlands.
by Ayşe Şahin Jun 05, 2015 12:00 am

Turkish citizens are expected to stream to the ballot boxes on June 7 to pick their representatives for the general elections. Roughly 57 million people will be able to cast their votes, and early indications suggest turnout will be high

Thousands of Turkish citizens are expected to flock to the ballot boxes on June 7 to have a say in the country's political future. Election fever has engulfed the public, which will choose its lawmakers to form the 25th Parliament of the country. There are a total of 56,632,889 voters, up 1,103,258 voters since the presidential election on August 10, 2014. Seventy-four million ballots have been printed and over 1 million Turkish citizens abroad have cast their votes for the upcoming elections, a factor that is believed to be influential in the elections, where every single vote will count. A high turnout is expected as Turkey has already proven its participatory side in previous elections in the country. Without a doubt, among others, two parties have taken center stage in the discussions as the country heads toward the elections – the Peoples' Democratic Party (HDP), which is seeking to pass the 10 percent election threshold, and the Justice and Development Party (AK Party), which is vying for a fourth term as the ruling party.

The HDP has to pass the 10 percent election threshold hurdle in order to enter Parliament, an issue that has led to heated debates among political analysts questioning the possibility of the aspiration being realized. The AK Party has held on to its long-standing wish to shift the current parliamentary system to a presidential one with a new constitution, making it a significant portion of the party's election manifesto. However, to push through constitutional changes, the AK Party will have to secure 330 out of the 550 seats in Parliament. There are also claims the ruling party will not be able to lead single handedly and will be forced to look for a coalition partner.

The AK Party has been stringently warning against impediments to swift execution that might emerge with a coalition government, citing Italy, which recently changed its laws to end coalition governments that had blighted the country's mechanism of decision making. Taking into account the predictions of a majority of polls and the opinions of analysts, the most likely scenario appears to be that the AK Party will receive enough support from the voters to lead as a single party.

As for the main opposition Republican People's Party (CHP), it has come to the forefront with economic promises, varying from a significant increase in the minimum wage, reducing diesel prices to TL 1.5 ($0.60) per liter as well as a poverty wage program for poor families. The chairman of the party, Kemal Kılıçdaroğlu, who had been criticized by his base for building his campaigns solely on conducting propaganda against the ruling party in previous election campaigns, shifted his strategy in the campaign and leaned toward economic issues in response to the criticism. However, this too may not have sold, as the promises made by the opposition leader failed to convince the public, who are calling into question the applicability of the promises.

The Nationalist Movement Party (MHP), due to its nationalist ideology, has announced in its election manifesto that the reconciliation process the government pursues with the PKK to end the Kurdish question would be halted if elected. It is believed to be increasing its votes compared to previous elections, as the rise of the HDP also triggered tensions in some circles that are expected to vote for the MHP in reaction to the HDP.

Prime Minister Ahmet Davutoğlu, while campaigning, focused on the progress Turkey has achieved in terms of social standards, the economy and politics during the tenure of his party. Touting improvements that have eased the lives the country's people, Davutoğlu numbered a slew of works carried out by the AK Party while addressing supporters at rallies. He also held the most rallies across Turkey, while some regions that are less likely to vote for them have been neglected by opposition parties.

Taking into consideration the tone and context Davutoğlu adopts at rallies, it would not be wrong to say that he has used criticism against the opposition parties as part of his election strategy. This tactic, common to all parties, intensified as the elections drew nearer. Davutoğlu's main targets in his criticism were the HDP and the CHP. He castigated the two parties for what he calls their "anti-religious" election promises, one of which is their vow to shut down the Presidency of Religious Affairs. What looks like a strategy to garner votes from Turkey's Alevi community, which is not willing to be attached to the state-rune body, was criticized not only by Davutoğlu, but also President Recep Tayyip Erdoğan during speeches at inauguration ceremonies. The rhetoric of the two went even further when HDP Co-Chair Selahattin Demirtaş made the analogy that Taksim Square is to workers as the Kaaba is to Muslims.

The HDP adopted a democratic tone to expand its reach while addressing supporters in western provinces. However, this too has been slammed by government officials who accuse Demirtaş of posing as an advocate of democracy on one side and backing the armed struggle of the PKK and fueling violence in the east on the other.

Davutoğlu also targeted Kılıçdaroğlu for forming an alliance with the HDP, which he said is a move merely for the purpose of enhancing their ability to beat the AK Party in the elections. The parties in question also lean toward the possibility of a coalition in case neither party gains sufficient votes to lead as a single party.However, AK Party officials, confident that the party will secure enough seats to lead as a single party, have outspokenly said they are against coalitions. Davutoğlu, along with Erdoğan, has been speaking about the negative aspects of coalition governments by giving examples from Turkey's history, as well as the benefits of shifting from the parliamentary to a presidential system.
Last Update: Jun 05, 2015 11:24 pm
RELATED TOPICS