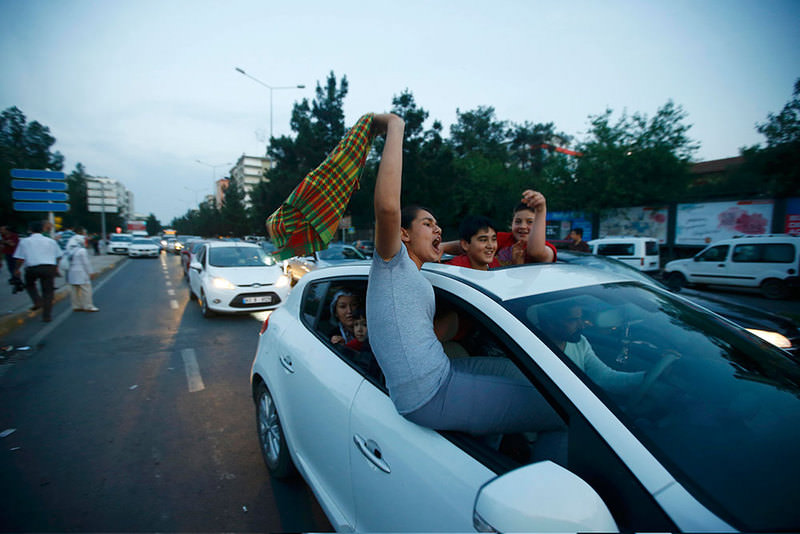 by Daily Sabah with DPA Jun 07, 2015 12:00 am
The pro-Kurdish People's Democratic Party (HDP) will surpass the 10 percent election threshold required to enter parliament, meaning the Justice and Development Party (AK Party) could face difficulties in making constitutional changes within the parliament, the initial election results showed.

After the party's victory passing the election threshold, HDP chairman Selahattin Demirtaş addressed a crowd gathered in front of HDP's Istanbul headquarters, saying the party will not be a part of the coalition that AK Party will form.

The party's deputy Sırrı Süreyya Önder also made a statement in which he said that the party is set to enter the parliament with 80 deputies, adding the HDP supporters should wait for the celebrations until the counting is finalized.

The AK Party secured 42.6 percent of the vote, followed by the Republican People's Party (CHP) and Nationalist Movement Party (MHP), and the HDP fourth with 11.3 percent.

People were celebrating in the mainly Kurdish city Diyarbakir in south-eastern Turkey on Sunday.

"I believe that today the dictatorship ends and democracy begins. Today is a hopeful day," says 38-year-old Ferid Kanzary, a construction worker, about the prospect of the HDP entering parliament for the first time.