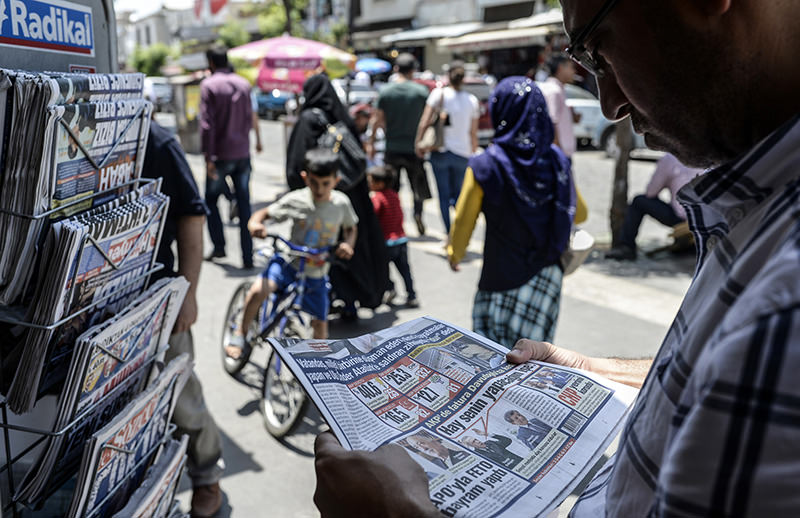 A man reads a newspaper to check the results of elections in Turkeyu2019s southeastern province of Diyarbaku0131r on June 8, 2015 (AFP Photo)
by Didem Atakan Jun 08, 2015 12:00 am
According to the unofficial results of the 2015 Turkish parliamentary elections, the single-party government of the ruling Justice and Development Party (AK Party) has come to an end.

The AK Party gained 258 seats in the parliament, below the threshold of 276 seats, the bare minimum to retain a simple majority in parliament. Therefore, two different options are waiting Turkey right now: a coalition government or a minority government.

What is a minority government and coalition?

In Turkey's political system, a minority government is formed when a political party does not have a majority of overall seats in the parliament (i.e. 276). The party or the parties enter into a formal alliance or agreement with other parties and get their vote of confidence.

A coalition government is one where all parties are "minority" parties, and everyone is required to cooperate to get anything done. But again, since it is a slow-process for different ideologies to meet at a common point, coalition governments are usually prone to collapse.

In a scenario where AK Party forms a minority government with its 258 deputies, it will need to get the support of at least one of the three parties which passed the election threshold of 10 percent and entered the parliament, or at least votes of 18 deputies that AK Party somehow convinces to vote "yes" in the vote of confidence to reach 276. But, with all these three parties' closing their doors to any kind of coalition with AK Party, uncertainty with respect to realization of such a scenario is in the air. Also, since inner party discipline is quite high as leadership issues and other causes of split have been minimized in opposition parties, it seems unlikely that AK Party will convince any of the 18 deputies to provide vote of confidence.

On the other hand, there are conflicting/opposing voices rising from the AK Party government. Turkish deputy PM Numan Kurtulmuş said on Monday that Prime Minister Ahmet Davutoğlu will be able to form a government within the mandatory period, adding that a coalition without the AK Party was not possible, whereas deputy Prime Minister Bülent Arınç said that the opposition consisting of the Republican People's Party (CHP), the Nationalist Movement Party (MHP), and the Peoples' Democratic Party (HDP) should go ahead and try forming a coalition.

The CHP and the MHP cannot form a government on their own, since the total amount of their deputies elected amounts to only 212, well below the bare minimum of 276 to form a government. These two parties, therefore, will need HDP's support with its 80 deputies to form the minority government, however, with MHP chairman Devlet Bahçeli's statement that it will not enter a coalition with any of the other parties, this scenario also does not seem viable for now. 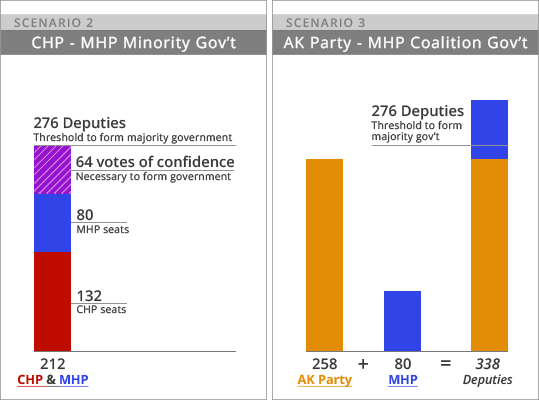 The MHP has long been seen as AK Party's most likely potential coalition partner. Prime Minister Ahmet Davutoğlu was observed to have adopted a relatively softer discourse when talking about the MHP during his election rallies, but again, with MHP Chairman Devlet Bahçeli's closing its doors to any kind of coalition with the AK Party, realization of this scenario is not for certain. The MHP took a very harsh stance against the AK Party and President Erdoğan during the election campaign.

Another scenario is AK Party and CHP forming a coalition government together. But the runner-up CHP, who got 24.96 percent of the total votes, ruled out Sunday any possibility of a coalition with the ruling party with a definite "No." Such a coalition may also create an outcry in CHP's electoral base, which has had a tough stance against AK Party government and its policies since 2002. The party is more than ever sensitive to its voters' demands as it lost many votes to the HDP than was predicted before the elections. 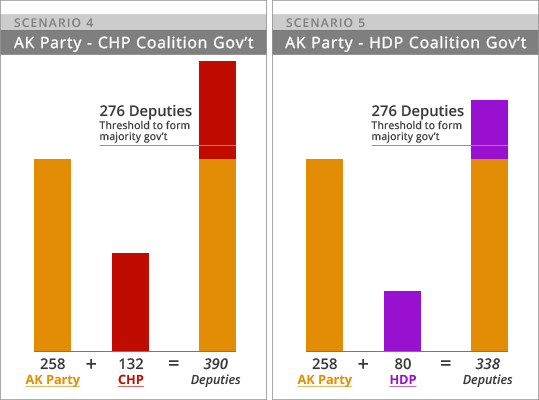 This was one of the most speculated scenarios during the election campaigns. Although HDP co-chairman Selahattin Demirtaş had not —at the beginning of the campaigns— ruled out a coalition with the AK Party government for certain, he later said, they would not enter any kind of partnership with the ruling party.

After the party's victory passing the election threshold of 10 percent on Sunday, HDP chairman Selahattin Demirtaş addressed a crowd gathered in front of HDP's Istanbul headquarters, saying the party will not be a part of the coalition that the AK Party will form.

According to many people, HDP's change of heart was due to the pressure Demirtaş received from potential voters, who cast votes for the party not because they believed in the party's pledges, but only to stop the AK Party from coming to power on its own. HDP's leap above the 10 percent threshold put it into a significant position in the parliament, with 80 seats. The party won seats greatly at the cost of the ruling party's current majority, making constitutional change on AK Party's terms unlikely and putting an end to discussions of a presidential system for now. The HDP's coalition with the AK Party, therefore, would be interpreted as a "betrayal" to his thousands of voters, who have likely made it possible for the party to leap above 10 percent. The pro-Kurdish party, with its independent candidates, received only about 6.5 percent of total votes in 2011 general elections.

However, due to Turkey's reconciliation process which was initiated by the AK Party government that promoted better living conditions for Turkey's Kurdish community, these two parties have in fact more policies in common than any other parties in the parliament. With this election, the HDP and its electoral base – a coalition of pro-Kurdish and socialist political movements – seized their first chance to be included in Turkey's state apparatus, an important incentive for the HDP to form a coalition with the AK Party. 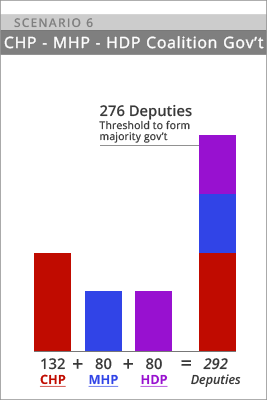 If the AK Party cannot form a coalition government with other parties, the CHP, the MHP and the HDP's deputies are just enough to form one, with their total of 292 deputies in the parliament. Such a scenario, although mathematically possible on paper, is actually quite difficult to actualize, since the right-wing MHP's strongly nationalist ideology clashes with those of the pro-Kurdish HDP.

In fact, this would not be the first example in Turkish history of different ideologies forming a government. In 1999, the MHP came together with Democratic Left Party (DSP) and center-right Motherland Party (ANAP). All the three parties sacrificed some of their policies, but they saw the coalition government as a necessary step to prevent military's increasing effect in Turkish politics. However unusual this coalition was, it managed to dodge two major earthquakes that devastated Turkey's industrial base, one major financial crisis due to ailing economy and financial system, various political crises and foreign policy issues. The ill-famed coalition pulled through many important administrative and economic reforms of the EU accession agenda, which were later benefited by the AK Party's single party governments.

This example proves that different ideologies could work under one goal even in very tough conditions, and with the current strength of Turkish democracy and economy, an uneasy coalition may still work.

If no working coalition can be formed, or a minority government fails to win a confidence vote within 45 days, the constitution gives the President Erdoğan the authority to call an early parliamentary election, which would be the seventh scenario.

That election would have to be held 90 days later.