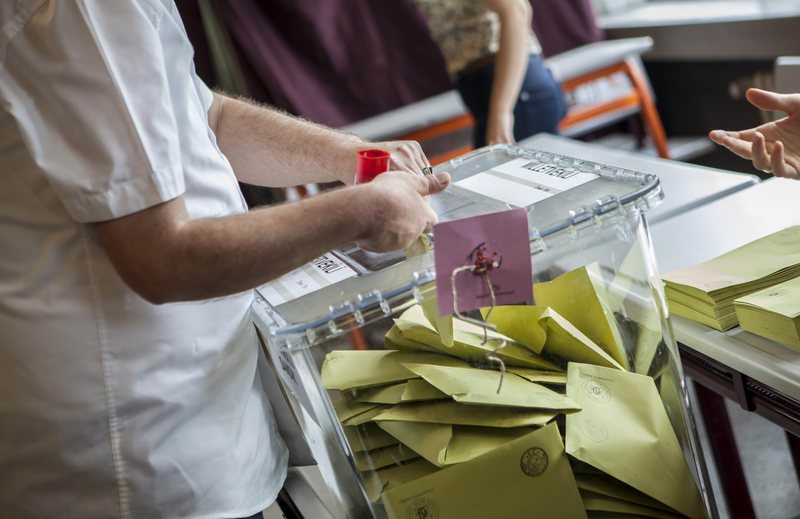 by Daily Sabah Jun 10, 2015 12:00 am
Ipsos, social research institute based in Turkey, has carried out the first survey after last Sunday's the parliamentary elections, conducting phone calls with 1,572 voters in 81 provinces.

The survey suggests that the voters of the pro-Kurdish Peoples' Democratic Party (HDP) and the Nationalist Movement Party (MHP) cast their votes with various concerns, while 22 percent of HDP voters making their decisions within the last week with a possible intent of preventing the Justice and Development Party (AK Party) from coming to power again. 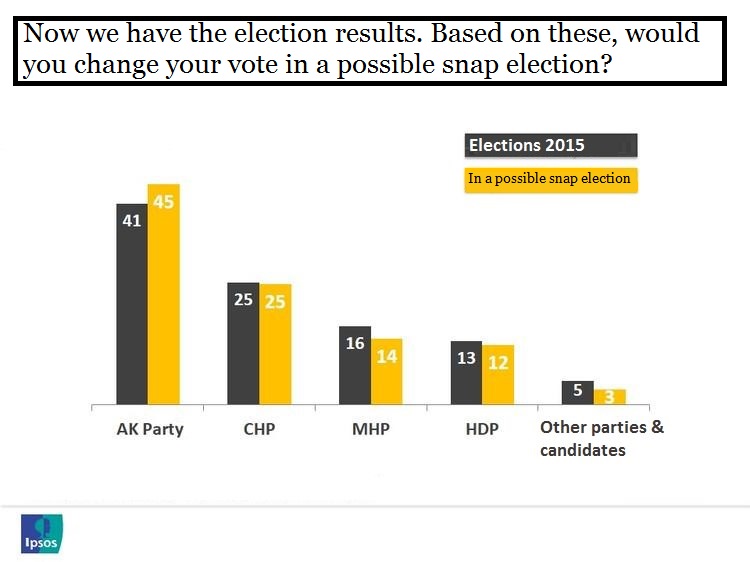 Twenty-two percent of MHP voters and 19 percent of HDP voters who participated in the survey indicated that they made their decisions in order to stop a certain political party from coming to power. This rate was 5 percent among AK Party voters in the survey.

Participants were asked which parties should form a coalition government and the predominant answer was an AK Party-MHP coalition.

Of survey participants, 67 percent of AK Party voters, 21 percent of CHP voters, 55 percent of MHP voters and 11 percent of HDP voters suggested that a coalition government must be formed between the AK Party and the MHP.

Despite the statements by HDP Co-Chair Selahattin Demirtaş regarding being a coalition partner with the AK Party, 58 percent of HDP voters in the survey said that the HDP and the AK Party should form a coalition government, while they did not want a HDP-CHP or a HDP-MHP coalition.

On the other hand, 58 percent of CHP voters in the survey support a CHP-MHP-HDP coalition, while only 13 percent lean toward an AK Party-HDP coalition.

While 66 percent of HDP voters in the survey had made up their mind two months before the election, 17 percent only decided to vote for the HDP in the last week. Some 86 percent said the twin bombings of the HDP rally in Diyarbakır, which left three people dead and more than 100 injured on June 5, two days before the elections, did not affect their choice at the polls. Some 13 percent said the attacks changed their decision.

Some 12 percent of respondents said they entrusted their votes to a party other than their original tendency, with the highest number of such votes being cast for the MHP, at 22 percent. The HDP followed with 19 percent, the CHP with 10 percent and the AK Party with 5 percent.

According to the respondents, while policies and promises played the main role in motivating 50 percent of AK Party voters, the identity of the party itself was the driving force for 46 percent of CHP voters and 49 percent of MHP voters in the survey.

While 50 percent of those surveyed said the broadcast speeches of party leaders were effective in them making up their minds in favor of a party, this ratio was 46 percent for President Recep Tayyip Erdoğan's speeches. As for the parties' election minibuses that drive around cities blasting campaign slogans through loudspeakers, which very common in Turkey, but often complained about due to the noise, had an effect on only 15 percent of voters in the survey.