President Erdoğan: Those leaving Turkey without a government will be held accountable 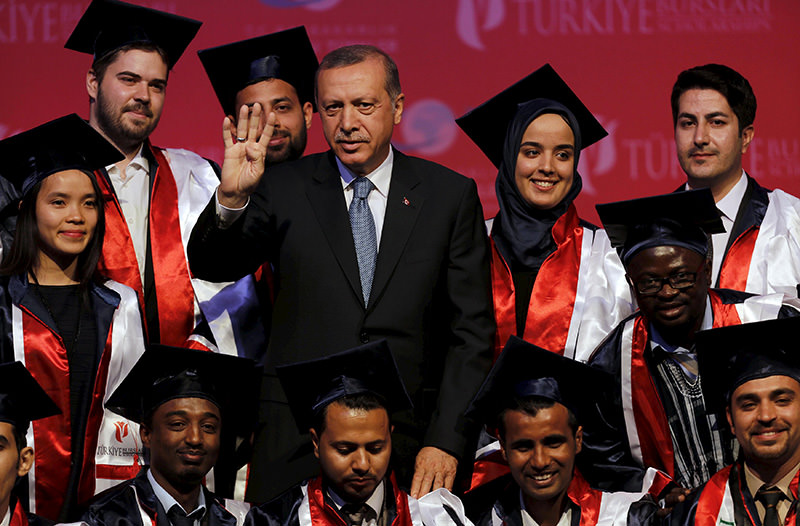 President Erdoğan has urged the four political parties that entered Parliament to form a new government as soon as possible, saying that those leaving Turkey without a government will not be able to pay for the consequences

President Recep Tayyip Erdoğan has urged Turkey's four political parties that entered Parliament after the June 7 general elections to form a new government as soon as possible, saying that those leaving Turkey without a government will not be able to pay for the consequences. Erdoğan made the comments on Thursday during his speech at the graduation ceremony of foreign students funded by the Turkish Scholarships Institution.

"Everyone should put their egos aside and a government must be formed as soon as possible, within the constitutional process," Erdoğan said, adding that he will do his part to support the parties in forming a government.

In his first public appearance since Sunday's parliamentary elections, Erdoğan said: "The election results reflect the national will and everybody should respect it. The results show that no single-party majority is available. I hope every political party evaluates the results carefully."

About the coalition options available to the political parties, Erdoğan hoped that the parties would choose a path of settlement within constitutional boundaries instead of crisis.

In a message to investors rattled by the political uncertainty, Erdoğan insisted that the election results "certainly do not mean Turkey will remain without a government."

The president also pledged to carry out his duty during the coalition negotiation process, saying: "Anybody who leaves Turkey without a government cannot answer to our nation or to our history."

Although the Justice and Development Party (AK Party) won the largest share of the vote in the elections, it lost its majority for the first time since it came to power since 2002.

Prime Minister Ahmet Davutoğlu said Wednesday that the AK Party would hold coalition talks with other parties, but warned that early elections were not ruled out should the discussions fail.

Speaking to journalists after the meeting in Ankara, Baykal said: "I saw that Erdoğan is open to any coalition formula. I gladly saw that he has no objections to opposition parties forming a coalition among themselves."

"The meeting request was a sudden one, decided in the morning upon the president's request," Baykal said. "We did not discuss coalition [possibilities] as I do not have any authority for such a meeting."

Baykal also said the meeting's place, the foreign minister's residence, was convenient to both his and Erdoğan's schedule.

"He did not have any special request, but I can make some inferences," Baykal said. "I saw that Erdoğan wants stability and a solution in Turkey immediately."

"It was a general discussion, we exchanged our views." Baykal also said that an early election is not a preferable solution.

Erdoğan said on Thursday that he discussed how the new Parliament will function under Baykal, since he will preside over the chamber until a permanent speaker is elected. Baykal, 76, is the oldest deputy in Parliament after Sunday's general elections, hence why the he was appointed to the temporary position of speaker.

The AK Party received the most votes at 41 percent in a fourth consecutive general election on Sunday and claimed 258 seats in Parliament, 18 short of a simple majority.

On Tuesday Erdoğan accepted the Cabinet's resignation submitted by Prime Minister and AK Party Chairman Ahmet Davutoğlu. The Cabinet and Davutoğlu were asked to continue their duties until the formation of a new government. Erdoğan is expected to ask Davutoğlu to form a government after Parliament convenes.