President Erdoğan to hold talks with party leaders, says gov’t must be formed as soon as possible 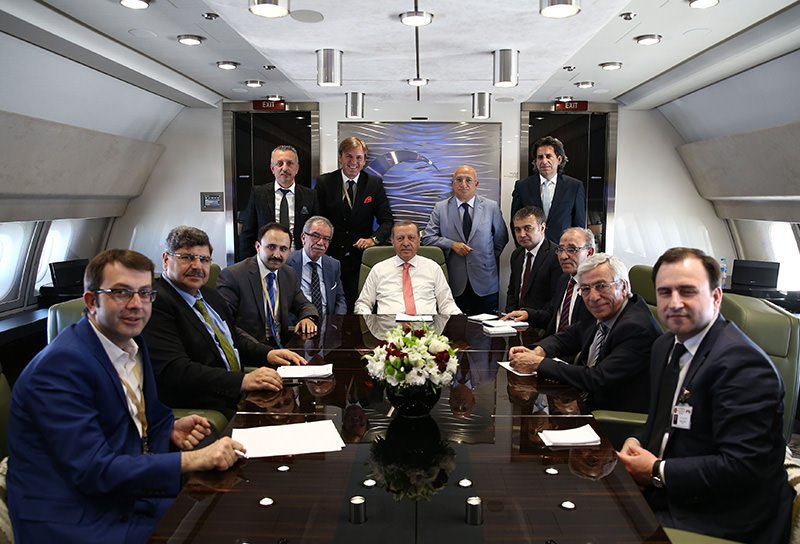 | AA Photo
by Nurbanu Kızıl Jun 14, 2015 12:00 am
President Recep Tayyip Erdoğan has underlined that the government must be formed as soon as possible in order to end uncertainty in the country.

The Turkish President spoke on Saturday at the presidential plane on his way back from the European Games organized at the Azeri capital Baku and stated that he may be inviting the party chairmen from each party next week and discuss their views regarding the process to form a new government.

Erdoğan stated that the will of the nation has been manifested at the ballot box and that all political parties respected this fact. He underscored that he is ready to speak with everyone he needs to speak to, and all actors who have a say and will contribute to the issue. He furthermore added that based on his understanding of political ethics, he will assign the party which received the most amount of votes with the duty to form the government, but if they fail then the next party would be asked to form the government. "The ballot box signaled a coalition, and did not allow any party to form a government by itself" Erdoğan stated, noting that there are 45 days to form a government.

President Erdoğan said that there would be no problems if parties were able to establish a coalition government, but in the case that they failed to establish a government then it would be inevitable for Turkey to hold early elections, in line with the Constitution. "I refer to this as 're-elections' rather than 'early elections' the Turkish president said, adding that it is crucial to form a government as soon as possible to ensure that Turkey's investments and international relations are not interrupted.

"We should all respect the results, but as a president I would like to note that I do not approve of some people's attempt to speculate different things" the president said, in reference to the discussions about the position of the presidency, as he underlined respecting the national will also means respecting the choice of 52 percent of the people who entrusted him the position of presidency.

He stated that the election figures were evident and called it political ineptitude to show the party with the least amount of votes as the winner of the elections. "This is not a positive approach for the country's future" Erdoğan said, who underlined that he does not approve of the majority to dominate over the minority, and vice versa.

In his first speech after the elections, Turkish President Erdoğan urged the four political parties to form a new government as soon as possible, saying that those leaving Turkey without a government will not be able to pay for the consequences.

Although the AK Party won the elections, receiving roughly 41 percent of the votes, the support it gained from voters was not sufficient for the party to reach a majority needed to form the government on its own. This has led the party to look for a coalition partner.
Last Update: Jun 14, 2015 1:22 pm
RELATED TOPICS