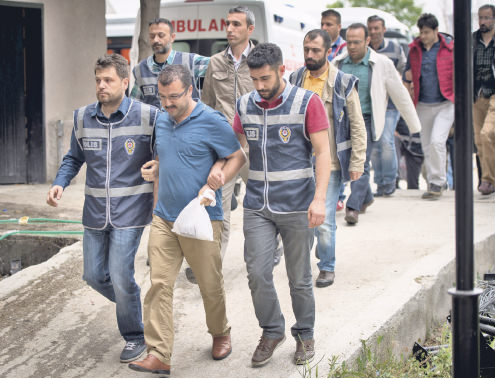 In the fourth wave of a cheating scandal, 21 Gülen Movement-linked suspects were taken into custody for allegedly cheating on the Public Personnel Selection Examination in 2010. Dozens of others were arrested in prior operations

Police on Monday detained 21 Gülen Movement-affiliated suspects as part of a probe into alleged fraud in the 2010 civil service recruitment exam, known as the Public Personnel Selection Examination (KPSS).

The police launched the operation in Ankara and the country's largest province, Istanbul, after the Ankara Prosecutor's Office ordered the detention of 23 suspects. Efforts continue in the search for two other individuals. The suspects face charges of leaking the questions of the KPSS exam in an "organized manner."

Allegations against the Gülen Movement-affiliated suspects are not only limited to the judiciary, but also to their placement in public institutions. The KPSS cheating scandal recently hit the headlines when it was discovered that numerous people allegedly affiliated with the Gülen Movement received full marks on the exam even though they had performed poorly in previous attempts.

The suspects in the first operation also faced charges of being members of a criminal organization, forgery, illegal and harmful activity in public institutions, destroying criminal evidence and abuse of power. Police units launched the second wave of the KPSS cheating investigations in 28 provinces and took 35 of the 78 suspects into custody on Monday morning. Nine other suspects were taken into custody a day later and the whereabouts of the 33 others is reportedly unknown.

Members of the Gülen Movement have allegedly infiltrated state institutions with the supposed aim of bringing down the elected government and taking over the state. The network is run by Fethullah Gülen who lives in self-imposed exile in Pennsylvania.