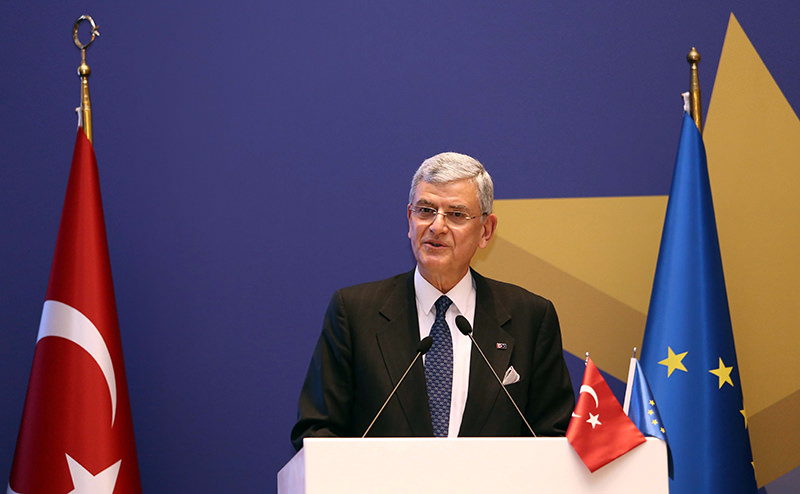 by Nurbanu Kızıl Jun 25, 2015 12:00 am
The AK Party may be nominating Volkan Bozkır, Turkey's Minister for European Union Affairs and the Chief Negotiator as its parliamentary speaker candidate in a surprise move, insiders have reportedly said.

Following the announcement of opposition parties' candidates for parliament speaker on Wednesday, the AK Party is also expected to announce its candidate soon and insiders have claimed that Volkan Bozkır could be a surprise name for the AK Party.

Coming from a bureaucratic background, Bozkır is a strong name for the candidacy as he successfully served as a minister and excels in diplomacy.

Deniz Baykal is currently acting as speaker of parliament as the oldest member. He presided over the parliament on June 23 during the oath taking ceremony and will stay until the election of a new speaker.

Ekmeleddin İhsanoğlu was CHP and MHP's joint presidential candidate and formerly served as head of the Organization of Islamic Cooperation (OIC). He ran in the presidential elections and was defeated by President Recep Tayyip Erdoğan. His nomination was criticized by many neo-nationalist CHP supporters as they claimed he was not a suitable candidate due to his conservative ideologies.

On Monday, Turkey's pro-Kurdish Peoples' Democratic Party (HDP) has announced the name of Dengir Mir Mehmet Fırat -who previously served as the deputy chairman of the AK Party- as its candidate for parliament speaker.

According to the Turkish constitution, the election of the speaker is conducted through secret ballot. The first two ballots require a two-thirds majority of the total number of members. An absolute majority is required in the third.

In the case that the parliament is unable to obtain this, a fourth ballot is held in a run-off between the two candidates who have received the highest number of votes in the third ballot.