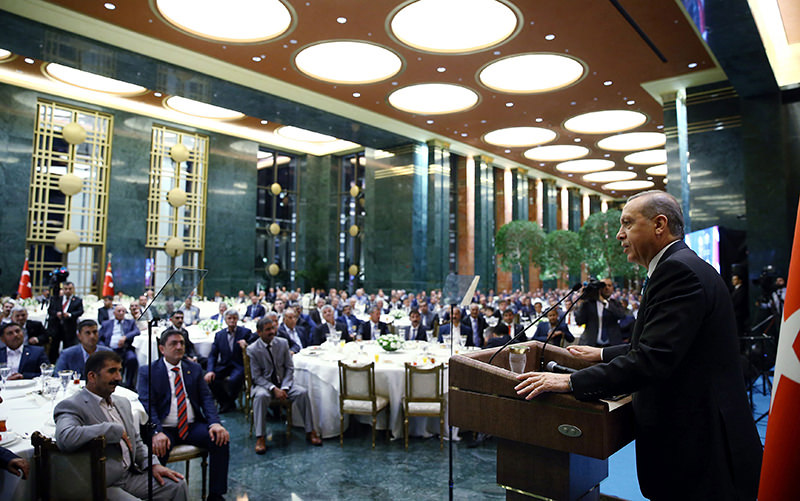 Speaking at an iftar dinner hosting municipal chairmen from 13 provinces throughout Turkey at the Presidential Palace, Erdoğan said he anticipates that parties will come together to establish a coalition.

He said a great deal of responsibility falls on the party chairmen to form a coalition. "Nobody has the right to repeat the pains of coalition experiences of the 1990s," Erdoğan said, adding that the current domestic and regional situation is critical and necessitates the formation of a government as soon as possible.

He said the authority to resolve the issue will be transferred to the people in the form of early elections if parties fail to fulfill their duty to form a government.

He also dismissed allegations by some media outlets that the large, round table used for iftars at the Presidential Palace is worth hundreds of thousands of Turkish lira, and said it was nothing but immoral slander. He also said he will file a lawsuit to settle the case.

Erdoğan's adviser Mustafa Varank dismissed the allegations in a statement issued on his Twitter account earlier this week and said the cost of the table was TL 4,600 ($1,728) and the rest of the furniture used for the dinner was purchased previously during the term of the 11th president, Abdullah Gül, and ninth president, Süleyman Demirel.

The AK Party received the most votes in its fourth consecutive general election on June 7, securing 258 seats in Parliament, 18 short of a simple majority, according to the official results. Although the AK Party received 40.66 percent of the vote, the support it gained from voters was not sufficient for the party to reach the majority needed to form a government on its own, which has led it to seek a coalition partner.