MHP wants to stay out of a coalition, early elections of AK Party - CHP coalition closer 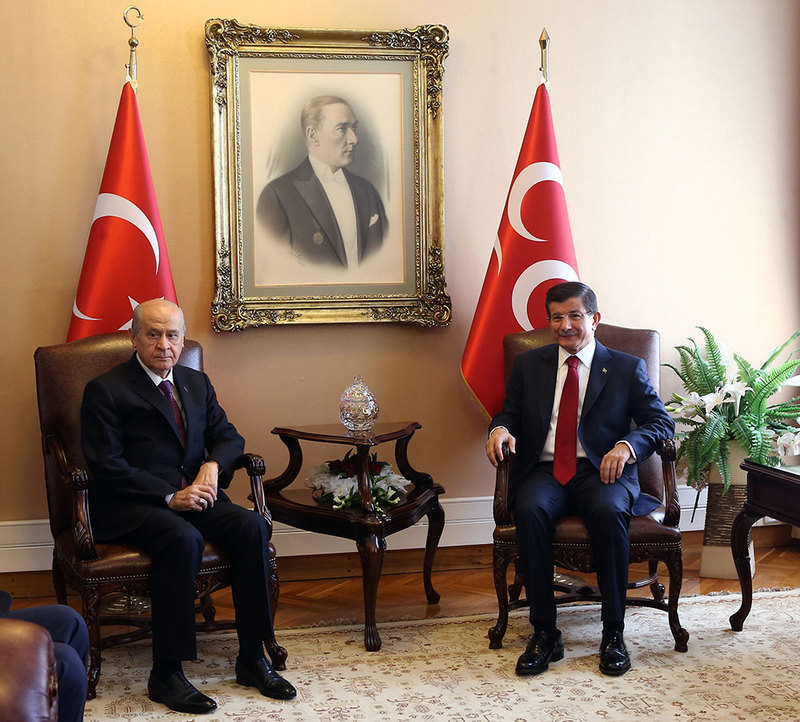 by Daily Sabah Jul 14, 2015 12:00 am
The Justice and Development Party (AK Party) Chairman and interim Prime Minister Ahmet Davutoğlu and the Nationalist Movement Party (MHP)'s leader Devlet Bahçeli met on Tuesday for discussions on a potential coalition at the Parliament in Ankara.

Following the meeting, Davutoğlu stated that MHP leader Bahçeli repeated his opinion of not being a part of a coalition government.

Davutoğlu emphasized that AK Party is still at the same distance with all parties, and regardless of success in coalition talks with CHP, AK Party can still meet with MHP in second round and in general to discuss the problems of the country.

Turkish news channel A Haber reported that according to MHP sources, during the meeting, Bahçeli said that the AK Party should first try a coalition partnership with the CHP, and if that does not work out then call for early elections.

Preliminary meetings for a possible coalition government began already on Monday with Prime Minister Davutoğlu visiting the CHP's Kılıçdaroğlu, at the CHP headquarters in the capital Ankara. Davutoğlu held a press meeting after Monday's meeting during which he said such pre-coalition negotiations were to establish an environment of peace in the first round of talks. Davutoğlu also said that party officials will conduct meetings before proceeding into the second round.

The prime minister is also expected to meet with co-chairman of the pro-Kurdish Peoples' Democratic Party (HDP), Selahattin Demirtaş and Figen Yüksekdağ on Wednesday to talk over a partnership, which, Davutoğlu previously said was a remote possibility.

The 45-day countdown began after Erdoğan gave Davutoğlu the mandate to form a government, which requires him to negotiate with other parties. Davutoğlu, who has been largely enthusiastic over a coalition, has said that although he will not exclude any party from negotiations, he will hone in on the CHP and MHP during the talks. He said if the talks failed to reach a conclusion in the first round, he will come to them again and push his luck for a partnership. If deal is not hammered out, then early elections will be inevitable.