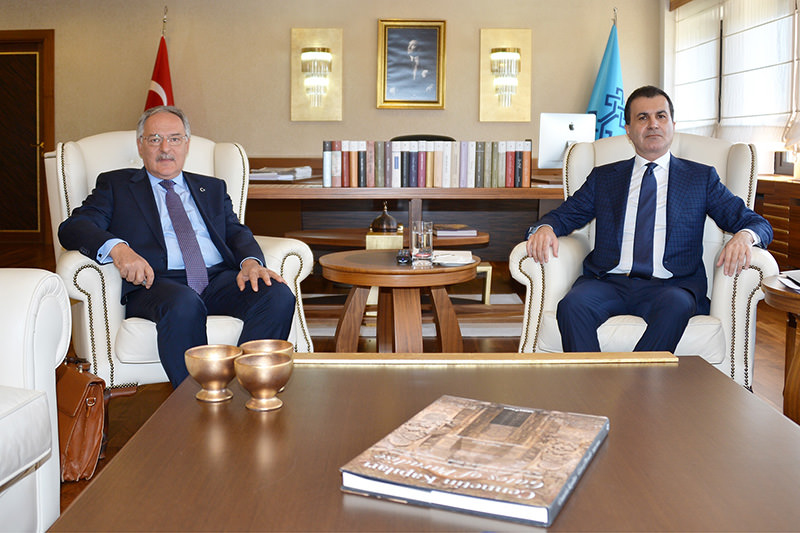 | AA Photo
by Merve Aydoğan Jul 21, 2015 12:00 am
After a meeting on Tuesday in Ankara between Culture and Tourism Minister Ömer Çelik and Republican People's Party's (CHP) Deputy Chairman Haluk Koç, officials announced that the two parties have reached an agreement on the methods of coalition talks following the nearly two-hour meeting. Explaining that the meeting was held in a positive atmosphere, Çelik said they discussed various topics. Koç said: "In today's meeting with AK Party officials, methods [for a coalition] have been elaborated." He added: "Coalition talks are not guaranteed to result in a coalition between the CHP and the AK Party," which was echoed by Çelik who said the possibilities of holding early elections and forming a coalition government are both equal.

During the Tuesday meeting, Çelik and Koç discussed where the parties already meet and where they still need to find common ground. Çelik said the delegations of the parties will likely meet at the latest by either the end of the week or early next week. Çelik also confirmed that he is to meet with Koç later this week, which is likely to be on Thursday, and that the details of where to meet and the subjects for negotiations will be discussed in the upcoming meeting.

Çelik stressed the significance of the process for Turkish politics and said the results from the meetings will be seen throughout the process. In addition, though Koç said party leaders may reach an agreement, he reiterated that Turkey's current foreign policy tops the CHP's agenda and that it is the most important item of the CHP in the negotiations.

Prime Minister Ahmet Davutoğlu is to meet with the AK Party Central Decision and Executive Board (MKYK) as well as the Cabinet on Tuesday evening to discuss the report that was prepared by AK Party staff officers as well as to discuss the recently held meeting between Çelik and Koç. Çelik and Koç are to inform their respective party leaders regarding the progress from Tuesday's meeting. After Davutoğlu and CHP Chairman Kemal Kılıçdaroğlu approve the ongoing process, the parties will determine the number of people to be included on the committees as well as whom they will be.