AK Party, CHP leaders to meet on Monday for second round of coalition talks 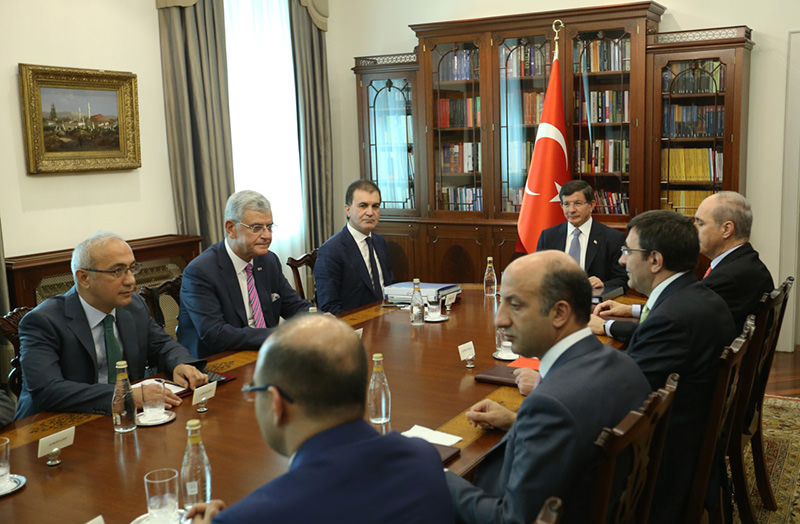 Çelik said: "The prime minister will address the topics that only concern the AK Party, which will be discussed at the party's Central Executive Board (MYK) tomorrow [Friday]. Prime Minister Davutoğlu will address the topics that are concerning the government at the Cabinet meeting on Monday." On the other side, the CHP's MYK convened on Wednesday under the chairmanship of Kılıçdaroğlu in which CHP Deputy Chairman Haluk Koç, who was leading the party's coalition delegation, presented the report prepared from the exploratory meetings.

Çelik said on Thursday that the upcoming meeting on Monday following the Cabinet meeting should not be seen as "do or die." Accompanying Kılıçdaroğlu, Koç will also attend the meeting with Prime Minister Davutoğlu in efforts to form a coalition government. As it has been reported that there are five items that the two parties disagree on, there are indications that CHP members are losing hope of a possible AK Party-CHP coalition due to recent statements by the Nationalist Movement Party (MHP).

The CHP, which is insistent on its 14 conditions, has reportedly demanded to be in charge of two critical ministries as a must in the exploratory talks. The two critical ministries that the CHP reportedly is insisting on are the Foreign Ministry in an effort to completely change Turkey's foreign policy, of which Davutoğlu is the chief architect, and the National Education Ministry. Educational policies are the second biggest area of disagreement between the CHP and AK Party. Regardless of the disagreements, Davutoğlu has previously said that he would discuss all options, suggestions and opinions with other party leaders in an "open-hearted manner." Davutoğlu has also previously underlined that the AK Party has "no prejudices or prerequisites and is ready to discuss all the essential issues required for governance."

The Constitution-mandated 45 days that Davutoğlu has to form a government ends on Aug. 23. In this regard, Davutoğlu is to begin the second round of coalition negotiations with party leaders. In addition to meeting with Kılıçdaroğlu, Davutoğlu is also to meet with MHP Chairman Devlet Bahçeli for coalition talks. However, as Davutoğlu had previously mentioned that the AK Party will re-launch coalition negotiations with the MHP, Bahçeli on Thursday urged the prime minister to announce an AK Party-CHP coalition on Friday afternoon.