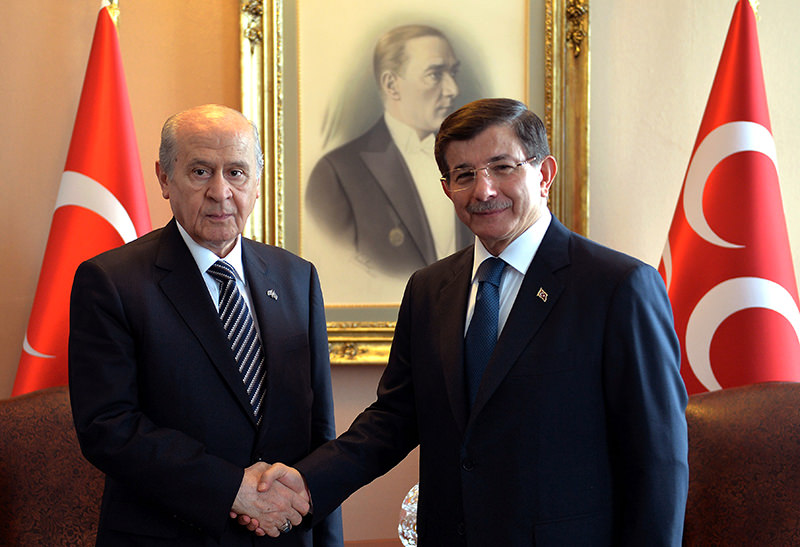 "The meeting took place in an honest and sincere atmosphere" Davutoğlu said, adding that Bahçeli told him that he does not think a coalition between the two parties was possible based on the four conditions of MHP including ending the reconciliation process, re-launching a probe over corruption allegations, putting a distance with the President and the protection of seperation of powers between different branches of the government.

Prime Minister Davutoğlu also stated that Bahçeli mentioned there would be no coalition at the beginning of the meeting, closing the doors of negotiation.

"We tried our best" Davutoğlu said, highlighting that as the Prime Minister, he tried all means to ensure that Turkey was not left without a government.

"It is evident that there are no grounds to form a coalition government, even though we really anticipated it" he said, adding that he respected the decision of both chairmen.

Davutoğlu also stated that he will leave his post as the prime minister if it is necessary for him to do so.

Davutoğlu met Nationalist Movement Party (MHP) Chairman Devlet Bahçeli at 2:00 p.m. on Monday, in an attempt to form a coalition government after hours of talks between the Republican People's Party (CHP) and AK Party ended unsuccessfully.

Prime Minister Davutoğlu requested a meeting with MHP Chairman Devlet Bahçeli last week after the final round of coalition talks between the AK Party and the CHP failed. However, Bahçeli reiterated that he would not be part of any coalition negotiations unless the AK Party accepts his demands to completely end the reconciliation process with the PKK and on the condition that Davutoğlu keeps his distance from President Recep Tayyip Erdoğan.

In June 7 elections, the MHP won 80 seats in Parliament, and combined with the AK Party's 258 seats, the two parties could have easily forged a coalition and parliamentary majority.

When the deadline to form a government expires on Aug. 23, either President Erdoğan or Parliament can decide to hold early elections. If the president issues the decision, then polling is supposed to be held the first Sunday following a 90-day period starting from the end of the first deadline.

However, if Parliament makes the decision for a new election, then the Supreme Election Board (YSK) can cut the 90-day period by as much as half.
Last Update: Aug 17, 2015 7:32 pm
RELATED TOPICS