PM slams rumors about president’s power ahead of snap elections 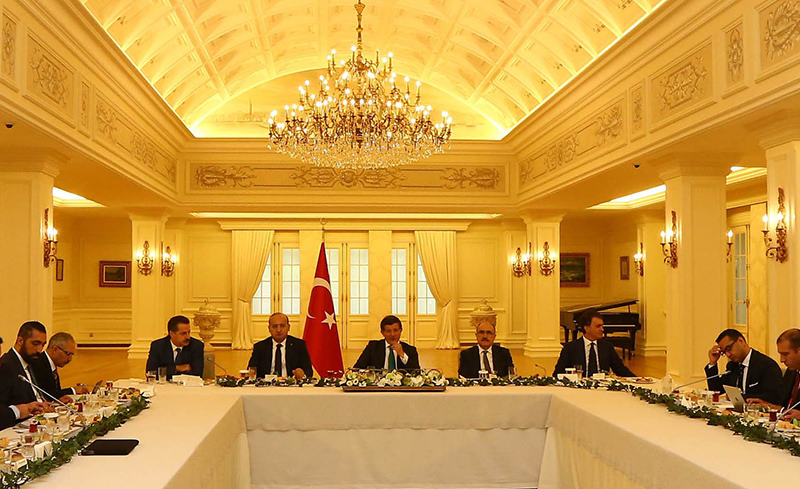 | IHA Photo
by Ali Ünal Aug 20, 2015 12:00 am
Interim prime minister and chairman of the Justice and Development Party (AK Party), Ahmet Davutoğlu, said that he had done everything possible to form a coalition government and has a clear conscience. Speaking to Ankara representatives of major news outlets on Wednesday after he returned the mandate to form a government to President Recep Tayyip Erdoğan, Davutoğlu said that constant discussions about the president is exhausting the public and added that it is not right to continuously discuss the post of the presidency.

Davutoğlu, who will most likely be appointed as the interim prime minister for the caretaker government by Erdoğan, said that expertise, merit and harmony will be emphasized as the three main principles when he selects members of the caretaker government. Beginning his speech citing Winston Churchill's saying, "This is not the end. It is not even the beginning of the end. But it is, perhaps, the end of the beginning," Davutoğlu, said that these words described the current situation well. He said that other parties should not start polemics over the participation of Peoples' Democratic Party (HDP) deputies in the caretaker government, as it is in accordance with the Constitution. He said: "I am against the HDP's policies, as they use a destructive discourse. We did not get the HDP into Parliament and we are not responsible for the failure of coalition talks." Davutoğlu also said that he will emphasize expertise, merit and harmony in the caretaker government.

Claiming that the constant discussions about the president are exhausting the public, he added: "It is not right to continuously discuss the post of presidency. Our president was elected with 52 percent of the popular vote and he is carrying out the task that was endowed by the people." Responding to questions about Erdoğan's recent statement in which he said that a "de facto change" in Turkey's political system has occurred, Davutoğlu claimed that the current system could not be defined as parliamentary. He signified that the current parliamentary system is nonfunctional and creates crises. Pointing to the interferences of the Chief Public Prosecutor and the military during the 2007 presidential election, Davutoğlu said: "This dark past cannot be forgotten." In addition, explaining that the presidential system was in the AK Party's election manifesto, he said: "I have discussed and will continue to discuss this issue until the system is remedied. However, considering the current process, it is not the priority right now."

Stressing that the operations against terrorist organizations, specifically the Islamic State of Iraq and al-Sham (ISIS) and the PKK, will continue with determination, Davutoğlu said that the operations will not stop even if the PKK calls for a tactical cease-fire. He said that there is no alternative to public order and said: "No one should ever fantasize about subjecting public order to a negotiation; we will not tolerate it."

Evaluating the AK Party's fifth ordinary congress, which will be held on Sept. 12, Davutoğlu said that he did not feel anxious regarding the party leader election. "I am not anxious about the congress. If one of my colleagues wants to be a candidate, it is their right to do so. I think it is more appropriate to go to parliamentary elections after receiving the mandate from the congress," he said.

Asserting that the three-term rule in the AK Party bylaws is a prominent principle and would be maintained, Davutoğlu said that an amendment could be passed in the congress for approximately 20 deputies who are currently in their third term that would enable them to be re-elected.

Davutoğlu said that they will employ a positive discourse in the upcoming elections and said: "We will correct our mistakes in accordance with public feedback. If we have to discuss new issues, we will."

Responding to a question about the economy, Davutoğlu said that current exchange rates had increased due to speculation, not structural issues. He added that Turkey's economy was performing well, considering the condition of the global economy.