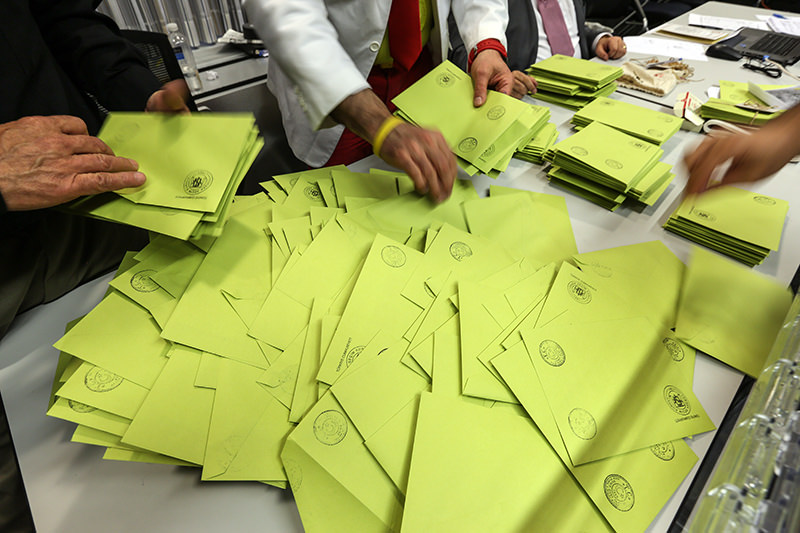 | AA Photo
by Nurbanu Kızıl Aug 20, 2015 12:00 am
Turkey's Supreme Election Board (YSK) on Thursday presented a draft to four main political parties for elections to take place on November 1, following the failure of coalition talks between political parties.

With only three days left till the August 23 deadline set by the Constitution to form a new government; the YSK sped up its preparations for a snap election and submitted a 60-day draft calendar for the elections. The draft has reportedly shortened the timeframe for a number of processes including the applications for candidacy, and objections to voter lists.

The final date for early elections will then be determined and announced by the YSK.

Snap elections emerged as the only option for the future of Turkish politics as coalition talks held between the AK Party and opposition parties Republican People's Party (CHP) and Nationalist Movement Party (MHP) failed.

Turkey's Finance Minister Mehmet Şimşek has previously stated that political parties will not receive additional grants from the Treasury to finance their election campaigns in the case of snap elections.

Turkey held general elections on June 7 to choose its legislators for the country's 25th Parliament, shaping the future of Turkish politics. The two significant outcomes of the elections were that the AK Party, which was vying for a fourth term of single-party power, had a clear victory but failed to secure the 276 seats required to form a majority government, and the pro-Kurdish Peoples' Democratic Party (HDP)'s attempt to pass the 10 percent national election threshold to make its way into Parliament, by receiving 80 seats in the parliament. Although the AK Party received the most votes, receiving over 40 percent, roughly 15 percent more than the CHP, which received the second highest number of votes, some interpreted the elections as an AK Party failure as its rate dropped 8 percent from the 49 percent it received in the 2011 general elections. Since the bare minimum to retain a simple majority in Parliament was not achieved, the AK Party started looking for a coalition partner to form a government, which appeared to be a tough undertaking, taking into consideration the rigid differences between the policies of the parties in Parliament.

The MHP won 80 seats in Parliament, and combined with the AK Party's 258 seats, the two parties could have easily forged a coalition and parliamentary majority, but MHP's chairman Bahçeli has shut the doors for a coalition, and he also said his party would not support a minority government or early elections.