PM Davutoğlu to present caretaker cabinet to President on Friday 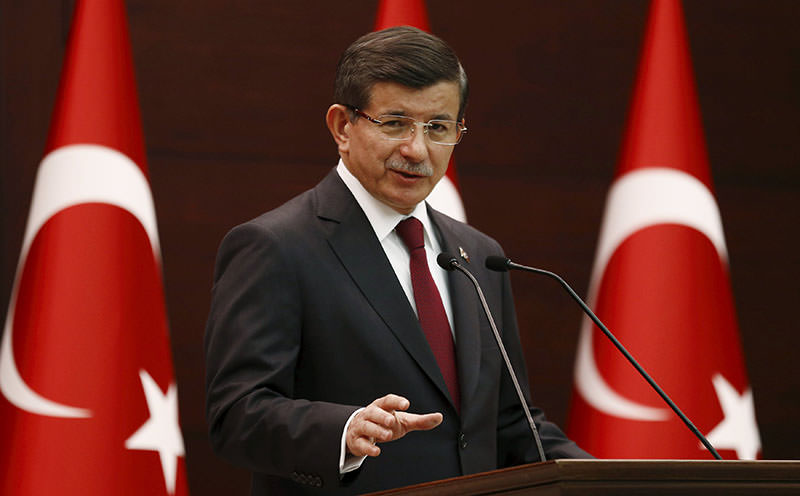 | Reuters
by Daily Sabah Aug 28, 2015 12:00 am
Prime Minister Ahmet Davutoğlu said he would present the list of names for a caretaker cabinet to President Recep Tayyip Erdoğan on Friday. The prime minister's meeting with the president was initially announced as 5.45 p.m. but was then rescheduled to 6.30 p.m.

"Hopefully, I will present the new cabinet to our president this afternoon," Davutoğlu told a televised party meeting on Friday. "In one sense, it will be the most concrete step of going to the early polls."

The prime minister has been working since Tuesday to form a provisional government to run Turkey until a general election rerun on November 1, announced by President Recep Tayyip Erdoğan the previous day.

Referring to the interim cabinet he will head, Davutoğlu said, "We will not work in the spirit of an interim government," but like a full-term, "four-year government".

Current AK Party ministers will remain in place until the caretaker administration is formed.

There are 25 ministry positions in the Turkish government. Three vital portfolios -- interior, transport and justice -- will be allotted to non-partisan figures while 11 posts were to go to the Justice and Development Party (AK Party) with opposition parties supposed to take the remaining 11.

11 members of the opposition, who include five members of the main opposition Republican People's Party (CHP) and three members each from the Nationalist Movement Party (MHP) and People's Democratic Party (HDP) were offered a seat in the cabinet and had until 6:00 pm local time on Thursday to accept or decline Davutoğlu's invitation.

Prime Minister Davutoğlu received mixed reactions from the other parties in Parliament for ministerial positions in the caretaker Cabinet. Davutoğlu said the AK Party has been trying to find common ground with all political parties since the elections, but all of them, particularly the Nationalist Movement Party (MHP), shut their doors to compromise and unjustly blamed the AK Party for contradicting the Constitution. "It was [MHP Chairman Devlet] Bahçeli who closed every single door since June 7," Davutoğlu said, adding that Bahçeli refused all options and possibilities that were on the table to form a government. He criticized party leaders for opposing early elections and said they were responsible as they were the ones who refused all offers.

Davutoğlu thanked MHP Deputy Tuğrul Türkeş for accepting the offer to take part in the caretaker Cabinet and for taking responsibility in line with the Constitution while displaying ethics suitable to a statesman despite the pressure. He criticized Bahçeli for slamming Türkeş for accepting the offer and said that history will record those who avoided taking responsibility at critical times.

While the MHP and CHP had previously announced that they would not participate in a caretaker government, Türkeş accepted the prime minister's offer on Wednesday. Türkeş, who is the son of the founder of the MHP, received intense pressure from his party to resign. The party said that Türkeş would be expelled if he did not resign. The MHP has been under fire for its uncompromising attitude since the June 7 elections. The party's stance has created dissent within the MHP. Sinan Oğan, a former deputy, was expelled from the party for saying that the party performed poorly in the June 7 elections and could fail to pass the 10-percent election threshold in the upcoming Nov. 1 elections.

As for the HDP nominees, the party's co-chairman Selahattin Demirtaş said on Thursday that all the three deputies to whom Prime Minister Davutoğlu had offered a seat in the caretaker government on Wednesday would start their duties soon. But, soon after the co-chairman's statement, HDP deputy Levent Tüzel announced he will not accept the seat offered to him in the parlaiment.

Levent Tüzel from Istanbul, Müslüm Doğan from İzmir and Ali Haydar Konca from Kocaeli were the three HDP deputies that Davutoğlu invited to join a caretaker cabinet to lead the country to a snap election in November.

As for the CHP, there is reportedly no deputy who accepted the ministerial seat. Deniz Baykal from Antalya, Erdoğan Toprak and İlhan Kesici from Istanbul, Ayşe Gülsün Bilgehan and Tekin Bingöl from Ankara are CHP figures to whom ministerial seats were offered.