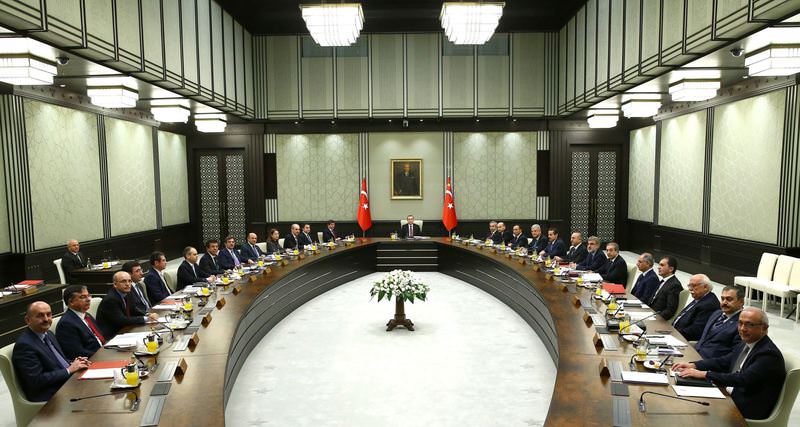 The National Security Council (MGK) discussed how to address rising security concerns in the country in the run up to the Nov. 1 elections in addition to criticizing European countries' worrisome response to the Syrian refugee crisis

The National Security Council (MGK) convened on Wednesday in efforts to discuss critical matters mainly focusing on establishing enhanced security measures for the upcoming Nov. 1 early elections, the Syrian crisis, the operations against the PKK, ISIS and the Gülen Movement.

A written statement released after the MGK meeting said security measures, both past and future, to combat terrorism and terrorist attacks aiming to disrupt the peace and tranquility both inside and outside the country were reviewed. Regarding the PKK terrorist organization, the statement said: "No threat would weaken the hundreds-of years-old fraternal bond within our nation."

Recognized as a terrorist organization by Turkey, the U.S. and EU, the PKK announced on July 11 the end of the two-and-half-year cease-fire within the reconciliation process framework and started its attacks against Turkish security forces. Government figures show 72 security forces personnel and 20 civilians have been killed since July 7 - when a police officer was shot dead in a suspected PKK attack - and 965 suspected militants have been killed since July 22.On the matter of fighting against the Gülen Movement, both domestically and abroad, the statement expressed Turkey's determination to fight against such illegal structures and as a democratic state of law, all procedures would be carried out within the legal framework.

Police raids in Ankara and Istanbul have targeted the premises of Koza İpek Holding, a conglomerate with interests in the media, mining, construction and tourism. Police sources said however the raids did not target the holding's media organizations.

Security measures to ensure a peaceful and secure environment, away from any kind of oppression at the upcoming snap election on Nov. 1, were presented to the council in the meeting.

Recent events and developments in Syria were thoroughly evaluated; border security measures were reviewed, and restoring peace and security in Syria were discussed while asserting that the fight against ISIS with the U.S.-led coalition will continue "full-force and with the same determination," added the statement.

"The meeting reviewed border security measures and confirmed Turkey's resolute will and stance on enabling an environment of peace and security in Syria, including joint action with the international anti-ISIS coalition," the council said, which stressed Turkey's determination to continue the campaign against ISIS and other terrorist organizations based in Iraq and Syria.

The statement also expressed Turkey's concern over European countries' attitude toward the refugee crisis, which Turkey has been dealing with responsibly over the last few years. The council noted Europe's "ominous" handling of the influx of refugees and the need for a solution that respected human rights as a development that affects Europe and the Mediterranean region.

It called for the establishment of a "terror-group-free zone" within Syria as a key development for the "preservation of the Syrian people's right to life."

Many refugees heading for Europe are fleeing Syria's civil war, now in its fifth year, and Turkey is sheltering 1.7 million Syrians. Ankara has pressed for the creation of a safe zone across its southern border in an area currently controlled by ISIS.

Images of the body of Aylan, 3, washing up on a Turkish shore have shocked the world with the picture of Aylan's little body on the shore circulating in the media and on social media in the first few hours shortly after the accident, prompting emotional appeals Thursday to governments to do more to help migrants.