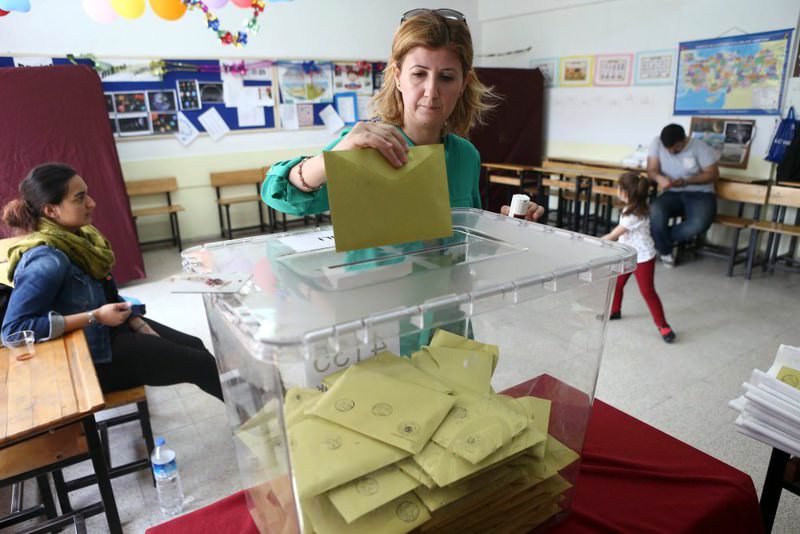 A poll conducted by Varyans Research Company predicts that the AK Party will regain some votes it lost in the June 7 parliamentary election and hold an absolute majority after the early elections on Nov. 1

Ahead of the early elections to be held on Nov. 1, the latest survey by Varyans Research indicates that the Justice and Development Party (AK Party) has regained support over the past two months and that the party is close to recovering the overall majority it lost in the June 7 parliamentary elections. Turkey is moving toward an election after no party was able to grab a majority in the June 7 parliamentary elections. Before the critical snap election, questions have arisen over which way the nation will vote, whether the AK Party will manage to hold a majority and how the latest terror attacks by the PKK terrorist organization will affect the public's voting habits.

Varyans Research Director Recep Sazkaya, taking the pulse of the nation before the elections, claimed that the AK Party is close to having the required majority to form the government alone, but it must make some amendments to relieve the public's concern. Responding to the question of whether the AK Party would regain the votes it lost on June 7, Sazkaya said that the party lost nearly 9 percent of the vote on June 7 compared to the 2011 parliamentary election and that the reason behind the decrease is mainly the party's approach to the Kurdish issue. Underscoring that the discourse to be adopted by the party is of the utmost importance during this pre-election period, Sazkaya said: "The government should ease people's lives [in eastern Turkey] and advance counterterrorism methods in cooperation with the region's people, while fighting terrorism."

He added that improvement should also be made in deputy candidate lists since candidate profiles play a crucial role in voting habits in provinces where Kurdish people are in the majority.

"The top figures in the party should also adopt an inclusive discourse for those who did not vote for the AK Party. Also, if an effective strategy is followed over the Syrian refugee issue, the party may regain parliamentary seats it lost by a neck in some provinces," added Sazkaya.

On the AK Party's loss of Kurdish citizens' votes in some provinces, he said that the AK Party will be able to compensate for part of its votes in some metropolises since Kurdish businessmen and artisans want stability.

In parallel with Sazkaya's remarks, the AK Party has already begun to make some amendments ahead of the snap elections. Research done by party staff and submitted to the party chair and Prime Minister Ahmet Davutoğlu assert that the main strategy is to revise some "wrong choices" in the deputy candidate list and take steps to reconsider items seen as "problematic" by the public. The party will also discuss the three-term rule that the party adopts in the event of a snap election. There might be some changes over the rule, considering whether the snap election is perceived as a "re-vote."

With regard to the struggle among the parties to form a coalition government, the Varyans Research head said that voters do not have the appetite to punish the parties they voted for before because a coalition wasn't formed.

"Nearly 60 percent want to see a party in power alone. So, there would probably be no shift in votes due to the June 7 election results," claimed Sazkaya.

He remarked that some voters who supported the AK Party in previous elections but voted for the Nationalist Movement Party (MHP) on June 7 might return to the AK Party due to the conflicting remarks and "uncompromising stance" by MHP Chairman Devlet Bahçeli over the coalition government.

"Both parties' voter profile is close to each other, and according to our research, the AK Party grassroots want to see the MHP as a coalition partner and vice versa. But, Bahçeli's stance toward the coalition talks created a disturbance among the voters, and it will probably result in a loss in the MHP's votes," he added.

The latest survey by Varyans Research predicted that the AK Party and the Republican People's Party (CHP) would increase their votes, whereas the MHP and pro-Kurdish Peoples' Democratic Party (HDP) would see a drop in their votes. According to the survey, the AK Party would be able to come to power alone by receiving 43.9 percent of the vote in the Nov. 1 elections with a 3 percent increase in its votes, while the CHP followed it with 26.2 percent with a 1.2 percent increase in its votes. The MHP appears to decrease to 14.1 percent from 16.3 percent while the HDP would decrease to 12.3 percent from 13.1 percent.
RELATED TOPICS