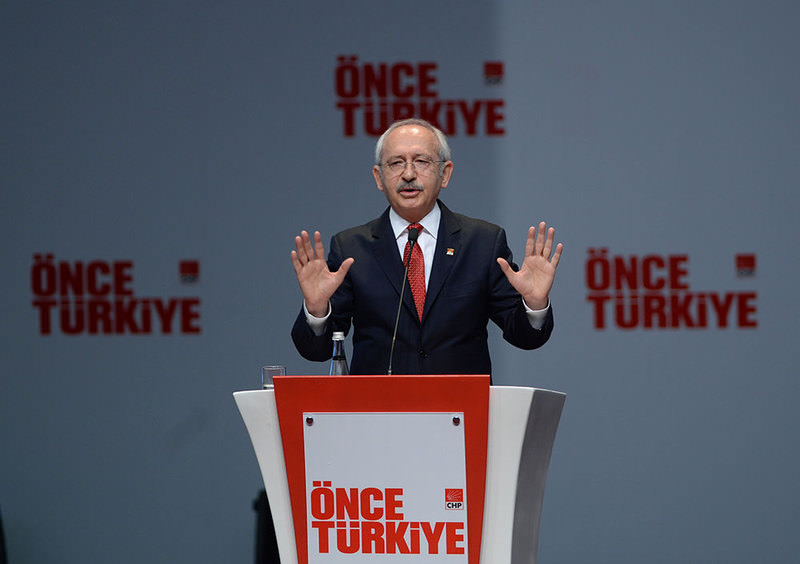 by daily sabah Sep 30, 2015 12:00 am
The Republican People's Party (CHP), runner-up in Turkey's June 7 elections, again became the first party to announce its election manifesto ahead of the Nov. 1 snap elections in Ankara on Wednesday with populist promises focusing on economy.

Under its slogan "Turkey First," Chairman Kemal Kılıçdaroğlu announced its manifesto, in which the CHP maintained most of its pledges from the earlier elections with minor modifications and additional promises to its manifesto. The party claimed that the CHP is the only party that can communicate with all parties and all segments of society, referring to its positive stance during coalition negotiations.

The increasing PKK terror and the current deadlock in the Kurdish question was the primary focus, and the party promised to resolve the issue through Parliament and with transparency.

Removing interest payments from delayed student loans, free lunch for students and teachers and removing social security deductions from working retirees, were among the additional pledges of the party. Assigning a veterinary professional and agricultural engineer to each village, under an agriculture reform pledge, was another new addition to the party's election manifesto.

The CHP maintains its pledge to increase the minimum wage to TL 1,500 ($495), while the pledge to sell diesel fuel used in agriculture from TL 1.5 per liter was modified to TL 1.8, due to increased costs as a result of a stronger U.S. dollar against the Turkish lira.

The party also kept its pledges for additional social housing, family insurance, and removing sub-contraction for public employees and two additional monthly pensions for retirees to be paid on religious holidays.

The "Central Turkey" project of building a megacity and logistics hub in Anatolia, which is expected by the CHP to create 2.2 million jobs in the next 20 years, was again included in the party's election manifesto. The party again pledged to introduce religion courses as optional, while party chairman Kılıçdaroğlu ensured that the CHP will not close Imam Hatip vocational schools during his speech.

An interesting pledge was to remove the Passolig Fan Card system, which was introduced to ensure security in stadiums. However, it is a widely debated topic, due to the low interest in attending matches after the system was introduced.