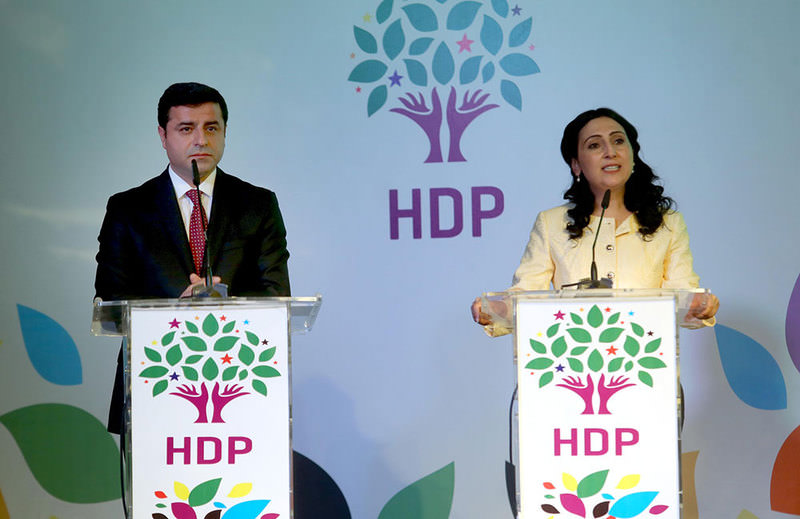 by Merve Aydoğan
Oct 02, 2015 12:00 am
The pro-Kurdish Peoples' Democratic Party (HDP) became the second party to announce its manifesto on Friday with a pledge to alter the anti-terror act or to remove it, if necessary. With the increasing terror attacks by the outlawed PKK resulting in a greater number of dead civilians and security officers, the HDP's manifesto further promises to decrease spending on the country's defense and security. Columnist and Kurdish political expert, Kurtuluş Tayiz told Daily Sabah that the HDP's pledges on terror reflect the 1990s political ideology of Turkey.

Additionally to Tayiz's statements, Vahap Coşkun, an associate professor at Dicle University in Diyarbakır, said such statements and promises are very normal for the HDP, describing the pledges as "parallel to the party's stance."

The pro-Kurdish HDP in its electoral manifesto, which was newly introduced by the party's Co-Chairs Selahttin Demirtaş and Figen Yüksekdağ, indicated that the anti-terror act as well as laws on domestic security will be modified or removed if necessary. Under the framework of living in a peaceful environment, the HDP's manifesto further pledges to decrease the funds spent on security and defense. Coşkun said that the HDP's pledges are not a surprise as the party had continuously said it was against the security and terror laws prior to the elections.

Describing the pro-Kurdish HDP's pledges towards terror as "an aim to drill a hole through Turkey's devoted efforts to combat terror," Tayiz added that such pledges are unrealistic and will not be popular among the general public. He further continued his statements by adding that the new electoral manifesto would force away current HDP supporters as well as voters that support other parties. Tayiz said that even HDP supporters are urging for public order and the end of terror attacks, thus he claimed that the HDP's pledges are only a reflection of the PKK's demands.

Within the HDP's electoral manifesto, the party also includes a number of economical pledges that promise to provide a certain amount of free electricity and water every month as well as heat support for everyone. Additionally, under the framework of economic pledges, the HDP also promises to give TL 250 ($82) for every renter who does not own a house of their own. The HDP's pledges continue by promising to provide free public transportation for all disabled and retired citizens as well as for those who are under 18 years old. Regarding such pledges, Coşkun said that after the June 7 elections, all political parties have realized that the economic pledges play a large role at the ballot box. However, he said that though such pledges are not impossible, they would still be tough for the HDP to accomplish. Similarly to Coşkun's remarks, Tayiz also said that such pledges have also come up during the June 7 elections, however he describes them as "unrealistic and unachievable."

Another controversial pledge by the pro-Kurdish HDP is changing Turkey's policy towards Armenia and apologizing to the Armenians over the so-called genocide. However, Turkey has officially refuted the allegations, saying that although Armenians died during the relocations, many Turks also lost their lives in attacks carried out by Armenian gangs in Anatolia. Turkey has called for the establishment of a joint commission of historians and the opening of archives to study and uncover what actually happened between the Ottoman government and its Armenian citizens.