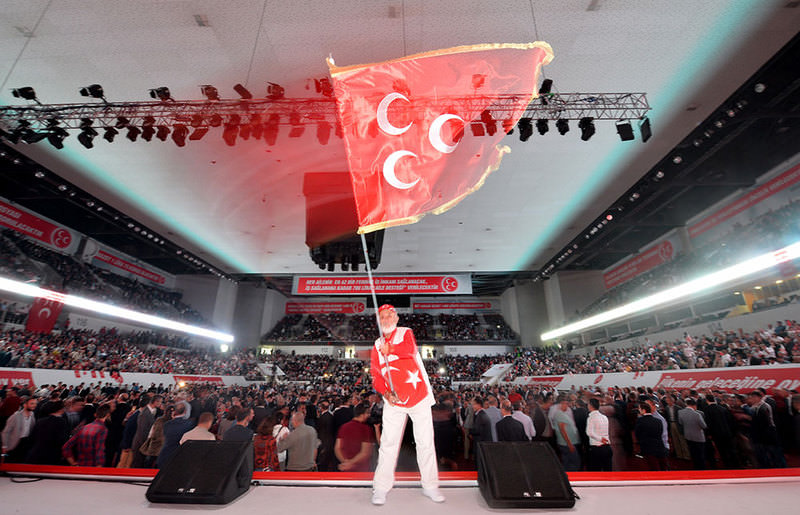 by daily sabah
Oct 03, 2015 12:00 am
The Nationalist Movement Party (MHP) became the third Turkish major political party after Republican People's Party (CHP) and Peoples' Democratic Party (HDP) to announce its election manifesto for November 1 elections through a meeting held in Ankara on Saturday.

Party Chairman Devlet Bahçeli criticized ruling Justice and Development Party (AK Party) and other opposition parties for trying to create a negative image of MHP. "(Prime Minister) Davutoğlu did not came to us with a coalition offer, he just stopped by as he was waiting for the termination 45 day period. If he would accept our four points/conditions (for a coalition), we would do our part" Bahçeli said. We are ready to form a coalition with every party, that accepts our four conditions, after November 1, except the HDP, which he referred as the political wing of PKK terror organization.

Bahçeli said that the party's foreign policy will be focused on making Turkey a global power and also pledged to put an end to the reconciliation process, officially initiated in early 2013, aimed at ending the 30-year conflict between the PKK and Turkey.

The MHP leader said the party will launch five new projects to solve Turkey's current problems, which will focus on reforming the state institutions, increasing production, fighting against poverty and combatting terrorism.

The party also announced its economic pledges and promised to raise the minimum wage from the current TL 949 (about $317) to TL 1,400 ($468), by cutting tax. Bahçeli also promised his party would provide TL 250 ($82) rental support to the citizens who do not own a house of their own. He also stated that the retired people would receive TL 2.800 ($936) support payment every year. Creating 2.7 million jobs in the next four years, with a 5.2% GDP growth per year was also included in the party's election manifesto.

As the three main opposition parties CHP, MHP and HDP have announced their election programs, the Justice and Development (AK) Party is set announce its own manifesto on Sunday.