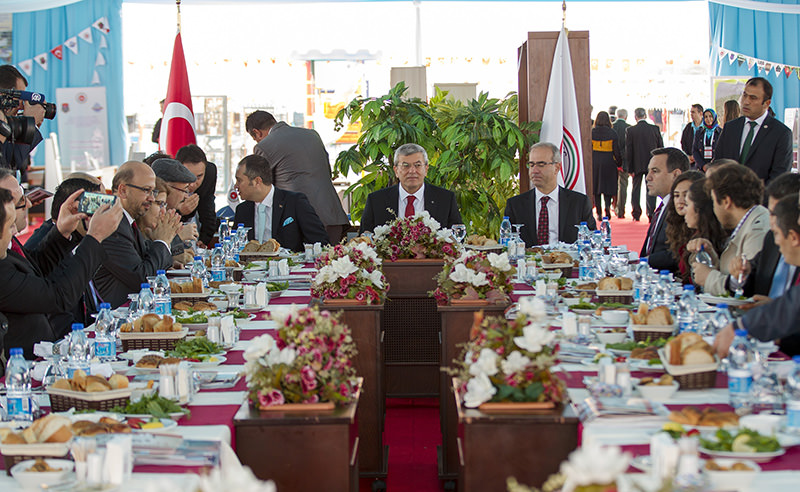 by Ali Ünal Oct 08, 2015 12:00 am
Interim Justice Minister Kenan İpek said the Supreme Election Board (YSK) should have carefully assessed the security risk before deciding not to allow the relocation of polling stations from certain high-risk locations in southeastern Turkey. Speaking to Ankara bureau chiefs of news outlets on Wednesday, İpek said the YSK is responsible for election security by law and the Constitution and that the security assessment should have been in line with this responsibility.

Last week the YSK overruled demands made by local election boards to relocate ballot boxes due to security concerns in the country's eastern and southeastern provinces ahead of the Nov. 1 snap elections. Prime Minister Ahmet Davutoğlu and President Recep Tayyip Erdoğan criticized the YSK decision for neglecting the security risk. İpek echoed the same criticism: "There is an ongoing terror problem in some of our provinces, therefore the YSK should have considered this security risk. It should have used it authority to take the necessary decision."

Touching on the recent indictment prepared by the Istanbul Chief Public Prosecutor, which is seeking a life sentence for U.S.-based fugitive imam Fethullah Gülen and 67 others for an alleged attempt to overthrow the democratically elected government, İpek said they may put and designate the Gülenist Terror Organization (FETÖ) on the terror organization list when the court decides. Regarding whether Interpol will issue a Red Notice for Gülen, the leader of the FETÖ, İpek said that they have not received any request from the court yet and added that they will carefully handle this issue whenever they receive a request.

About the fugitive Gülenist ex-prosecutors, Zekeriya Öz and Celal Kara, İpek said that they requested their extradition from the Germany but have not received a reply to the request yet.

Declining to comment on Article 301, a controversial article of the Turkish Penal Code (TCK) that makes it illegal to insult Turkey, the Turkish nation or Turkish government institutions, which was amended in 2008, has been resurrected in the form of TCK Article 299, which levies punishments on those who insult the president, İpek claimed that all European countries have similar regulations. "They are trying to create a perception that insulting the president or head of state is not a crime in European countries, but this perception does not reflect the truth. We have examined all the legislation in European countries and prison terms are already in effect in most of the countries, only some of them levy a fine for this offense," he said.

Giving detailed information about the figures of prisoners and detainees in Turkey, İpek said that as of October there is a total of 172,409 people in prison, which is equal to two for every 1,000 people. Underlining that this figure is about eight per 1,000 in the U.S., İpek said 162,903 of these people are imprisoned for ordinary crimes and 7,259 of them are serving prison terms for terror related crimes. İpek further added that there have been about 1,350 people arrested since July 24 in security forces operations against the PKK, the Revolutionary People's Liberation Party-Front (DHKP-C) and ISIS.
Last Update: Oct 08, 2015 11:42 am
RELATED TOPICS