Turkish PM Davutoğlu: The MHP and HDP are of the same mind 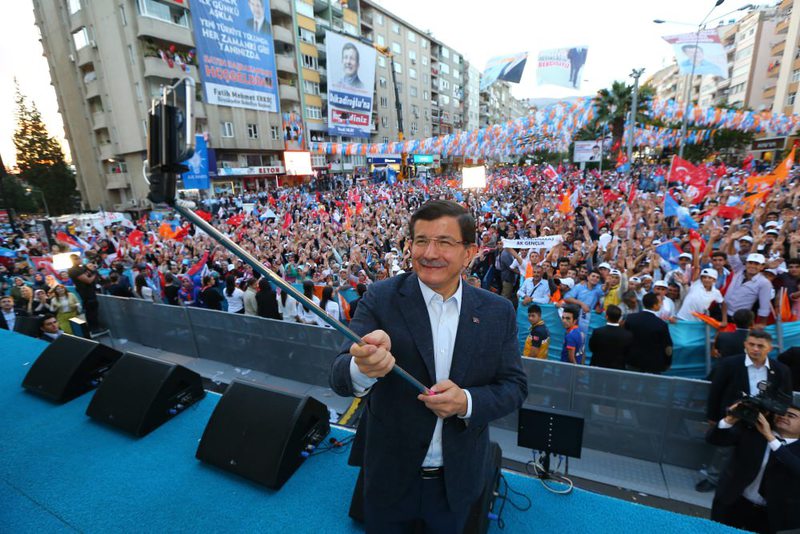 by daily sabah
Oct 10, 2015 12:00 am
Prime Minister and Chairman of Justice and Development Party (AK Party) Ahmet Davutoğlu continued his election rally in the southeastern province of Kahramanmaraş, where his party received 61.17 percent in the recent June 7 parliamentary elections. He said that after the elections, the party had interpreted the results accurately and started to conduct coalition talks in order to not to leave the country without a government. "However the opposition parties proved why they have to stay in opposition, they turned their backs on the people," accusing them of failing to act responsibly and in accordance with the interests of the population.

Indicating that Republican People's Party (CHP) used a polarizing rhetoric during the talks and was in efforts for tearing down all the 13-year experience that Turkey had in education and foreign policy, Davutoğlu said "[CHP chairman] Kılıçdaroğlu wanted to treat to the prime ministry to [MHP] leader Bahçeli. It is a thing that the nation gives, nobody can treat to it."

When people started to hoot down Bahçeli during the meeting, Davutoğlu stopped them and said "The nation will give them the real response in the polls," adding that Bahçeli's policies in which he opposed every option after June 7 elections, is nothing to escape from the responsibility.

Davutoğlu also said CHP and MHP cannot demand vote from people for 4-year government, since they refused to take part in the caretaker government, which will last only for three months.

"Peoples' Democratic Party (HDP) opened up its terror card. They refused to listen what people said but gave heed to what Qandil [PKK's headquarters] said," Davutoğlu remarked and added that the government gave the necessary response for those "who killed our police officers sleeping in their beds."

He said "We know this game before from June 7 general elections. They try to make overtures to people by mentioning democracy and ceasefire. However we will not make concessions unless arms are buried into the ground."

Claiming that MHP and HDP lean on the similar mentality, he said "MHP refused the demand of ballot box relocation. It benefited the terror. By acting together with HDP, MHP prevented this just for make AK Party to lose vote."

Turkey's Supreme Board of Elections (YSK) overruled Saturday last week ballot box relocation demands made by local election boards due to security concerns in the country's eastern and southeastern provinces ahead of November 1 snap elections.

YSK's decision was made by a majority of votes casted by board members, who are senior jurists who previously served in Turkey's Supreme Court of Appeals (Yargıtay) and the Council of State (Danıştay), the country's supreme administrative court.

Several local election boards, which are made up of political party members and senior bureaucrats serving in the area, had earlier decided for the relocation of some ballot boxes to safer neighborhoods due to security concerns in Cizre, district of Şırnak, Yüksekova, district of Hakkari, Ceylanpınar, district of Şanlıurfa and Silvan, district of Diyarbakır provinces all located in Turkey's southeast.

All these locations had witnessed increased terror activity by PKK terrorists in recent weeks that included barricades, bomb traps and attacks on security forces in urban settlements. The government and security forces responded with curfews and operations to ensure the security of daily life along with the upcoming elections. The PKK is listed by Turkey, the EU and the U.S. as a terrorist organization.

The issue was highly contested between the ruling Justice and Development Party (AK Party) and opposition parties as a whole, and especially by the pro-Kurdish Peoples' Democratic Party (HDP) that has significant presence in the region.