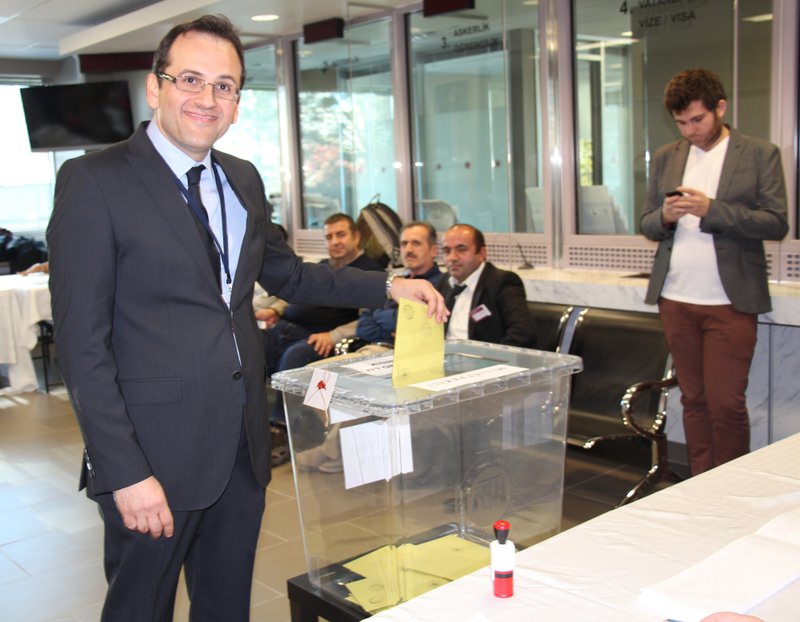 by Merve Aydoğan Oct 26, 2015 12:00 am
With less than a week left until the Nov. 1 early elections, voting ended for Turkish citizens living abroad as of Oct. 25. Despite Supreme Election Board (YSK) officials' expectation of a lower turnout than the June 7 elections, Asiye Bilgin, the Justice and Development Party's (AK Party) deputy representative in Brussels, claimed that turnout exceeded that of the June 7 elections. Out of the 2,866,979 Turkish citizens abroad that are eligible to vote, 150,000 voted during the first week of voting, which led to concerns of a low turnout.

Speaking to Daily Sabah, Bilgin said that as of Saturday 1.07 million citizens voted, which is higher than the turnout abroad for the June 7 elections, which was 1.03 million. She said: "We believe that we will break records in voter turnout in these elections." Regarding claims of low turnout, Bilgin said that they believed turnout would exceed that from the June 7 election from the very beginning due to their coordinated, comprehensive and active election work. She further added that despite challenges, Turkish citizens abroad rushed to the ballots. Bilgin said that during each election, the AK Party gains experience and also overcomes shortages.

Turkish citizens living abroad began voting starting on Oct. 8 at airports and customs gates, almost a month before the election date in Turkey, and ended on Oct. 25. The YSK allocated voting stations in 54 countries and ballot boxes were set up in 113 representative polling stations. The biggest challenge that Turkish citizens living abroad have to deal with is the distance to ballot boxes, as in countries such as Canada, citizens have to travel over 3,000 kilometers to vote. In countries such as Sweden, Macedonia, Greece, Bosnia-Herzegovina, Russia and Israel voting began on Oct. 25 and ended on the same day at 9 p.m. local time. Reportedly, nearly 10,000 citizens voted in Sweden on Sunday.

Commenting on turnout and saying that nowhere in the world is participation as high, AK Party Istanbul deputy Mustafa Yeneroğlu said voter turnout has been so great that even European Parliament elections did not reach these numbers. In a statement to Daily Sabah, Yeneroğlu said although 1,250,000 citizens abroad voted, the number is expected to increase with votes coming from customs gates. The distance to voting venues has especially been a great obstacle for Turkish citizens who live in various countries around the world, but Yeneroğlu said the people have proven everyone wrong and showed their loyalty to their nation in efforts to achieve stability in the country and send a message to all of Turkey.

Providing details of turnout rates, Yeneroğlu added that in the city of Bregenz, Austria turnout exceeded 50 percent and that in various cities in Germany such as Bremen, Düsseldorf and Cologne turnout also exceeded 50 percent. He said the AK Party expects to receive more than 60 percent of the overseas vote for the Nov. 1 elections.

Even though voting abroad ended on Sunday, citizens living abroad are eligible to vote until 5 p.m. local time Nov. 1 at customs gates. Turkish citizens living abroad can vote at 30 customs gates throughout Turkey. The votes at the representative polling stations and embassies will be brought to Turkey with official commissions that include political parties' representatives, YSK officials and officials from the Foreign Ministry.
RELATED TOPICS