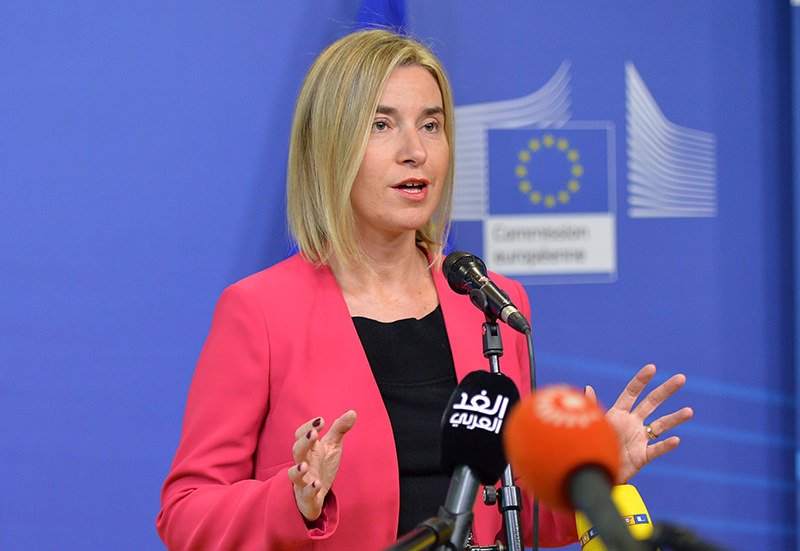 | AA Photo
by Daily Sabah with AA Nov 02, 2015 12:00 am
The European Union has described Turkey's elections as "a strong commitment of the Turkish people to democratic processes."

In a joint statement made on Monday after preliminary election results were announced in Turkey Sunday, EU foreign policy chief Federica Mogherini and EU Commissioner for Enlargement Johannes Hahn said: "Sunday's general elections in Turkey, which had a high voter turnout, have reaffirmed the strong commitment of the Turkish people to democratic processes".

"The EU will work together with the future government in order to further enhance the EU-Turkey partnership and to continue to advance our cooperation across all areas for the benefit of all citizens," they added in the statement.

Also on Monday, Council of Europe Secretary-General Thorbjorn Jagland said in a statement that he congratulated Turkish Prime Minister Ahmet Davutoğlu "on the result of the AK Party in yesterday's election with a strong voter turnout".

Jagland hoped that "when the new government is formed it will take the initiative to tackle the many challenges facing Turkey today and to build an inclusive society embracing all those who did not vote with the majority".

"We look forward to continuing our dialogue and cooperation with Turkey in areas of importance to the Council of Europe, including the country's role in accommodating over two million refugees, reform of the judiciary and freedom of expression," he added.

EU and Turkey are in the process of negotiating on a refugee action plan, under which the 28-nation-bloc has offered Turkey funding to reduce the flow of asylum seekers coming into Europe in exchange for easier visa travel rules for Turkish citizens seeking to visit Europe.

According to preliminary results based on 100 percent of votes counted, Justice and Development (AK) Party secured 49.5 percent of the votes -- a higher proportion than any of the predictions by opinion polls -- winning 317 seats at the 550-seat Grand National Assembly. The snap polls had been called following June's inconclusive general election that saw no party win a majority and coalition talks failed to produce an administration.

Of the 16 parties registered to contest the election, preliminary results suggest four parties passed the 10 percent threshold to gain seats in Parliament.