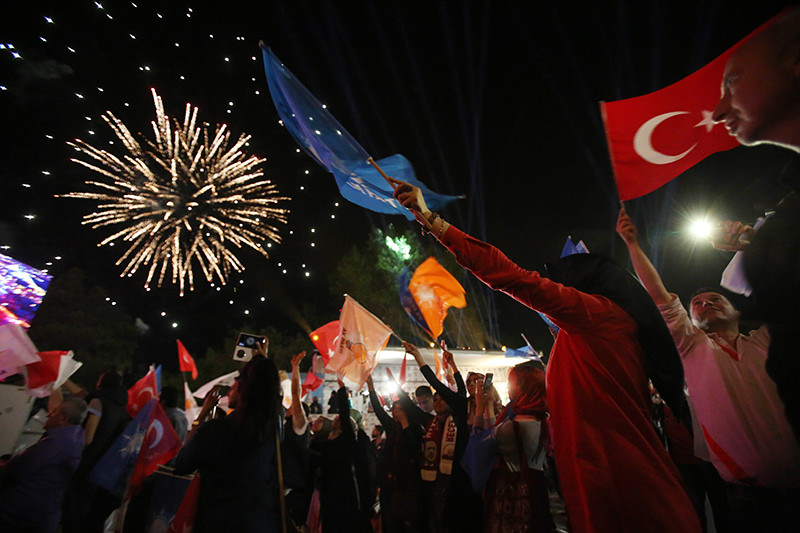 Official statements, mostly those congratulating Turkey's Justice and Development (AK) Party on its electoral victory, poured into Ankara from around the world Monday.

In a written statement made by the Turkish Prime Ministry Press Office, it said that German Chancellor Merkel had phoned PM Davutoğlu, congratulating his party's landslide victory in the elections.

The statement said that Davutoğlu thanked Merkel for her call and stated that with a 85% voter turnout and a peaceful atmosphere throughout the whole process, the elections showed "the maturity of Turkish democracy", while reiterating that the Turkish nation chose political, economic and democratic stability once again.

Merkel also said that "it would be a pleasure to visit Turkey again" for the G20 Summit which will be held in the southern Antalya province this November.

Khaled Meshaal, head of Hamas' political bureau, also congratulated Turkish President Recep Tayyip Erdoğan and Prime Minister Ahmet Davutoğlu -- the latter of whom leads the AK Party -- on the poll results, which effectively give the party a majority in the country's parliament.

In a statement, Hamas said Meshaal had called both Erdoğan and Davutoğlu to convey the Palestinian group's congratulations on Turkey's "democratic" electoral environment.

Meshaal also expressed hope that the poll results would "contribute to Turkey's development and stability" and "benefit the Palestinian people -- in their formidable struggle [against Israeli occupation] -- as well as the Turkish people".

Addis Ababa, too, registered its pleasure with Turkey's election results.

And in Tunis, Rached Ghannouchi, leader of the Ennahda Party, congratulated both Turkey and party leader Davutoğlu, saying: "Today is an important day for the Arab Spring and democracy."

According to Ennahda Party sources, Ghannouchi also called Turkey's Erdoğan to congratulate him on the AK Party's victory in the country's 26th general elections.

In Syria, meanwhile, 12 different opposition groups -- all of which oppose the regime of Syrian President Bashar al-Assad -- likewise congratulated Turkey on the poll results.

"The AK Party's victory is important in terms of the sensitive developments currently going on in the region," the groups said in a joint statement.

They went on to call on "all countries to help the ongoing revolution [against the regime] in Syria".

Groups that signed the congratulatory statement included the Sultan Murad Division; the Damascus Front; the Army of Mujahedeen; the Sahaba Brigades; and the Fastaqim Kama Umirt; among others.

In a separate message, a handful of other Syrian opposition groups -- including the Islamic Army and the First Brigade -- also congratulated the AK Party for regaining its parliamentary majority, going on to voice hope that Turkey would continue to "contribute to the region's stability".

And in northern Iraq's Kurdish region, media organizations close to the Kurdistan Regional Government (KRG) described Sunday's general elections in Turkey as a "victory for the AK Party".

According to preliminary results, the AK Party secured 49.48 percent of the vote -- much more than had been predicted by pollsters -- giving it a wide majority (317 out of 550 seats) in parliament.

Sunday's vote was called following inconclusive elections in June, which saw no party win an outright majority. Almost five months of subsequent talks between parties failed to produce a coalition.