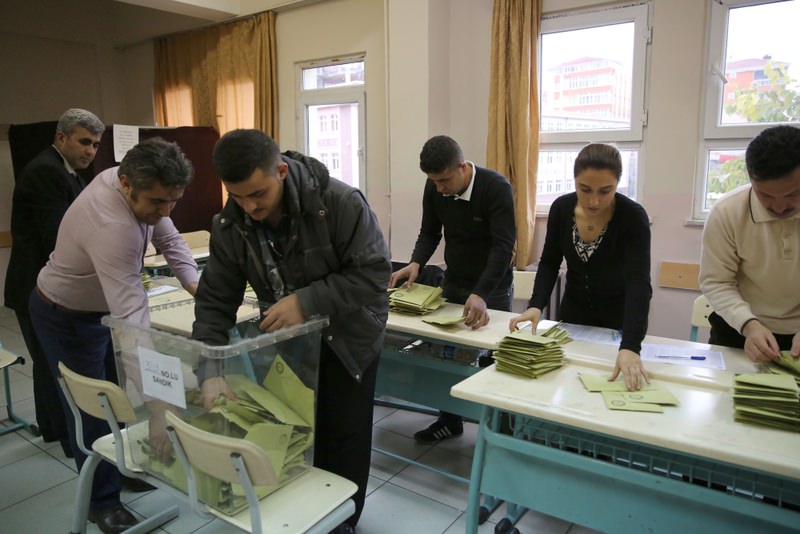 The civil society organization, Oy ve Ötesi (Vote and Beyond), which is strongly supported by opposition parties and monitored the Nov. 1 elections with 60,000 volunteers across Turkey, discredited allegations of election manipulation and said the election results announced by the YSK were in line with their assessment

The civil society organization, Oy ve Ötesi (Vote and Beyond), which monitored the Nov. 1 elections with 60,000 volunteer observers across Turkey, has condemned allegations of election manipulation and said the election results announced by the Supreme Election Board (YSK) were in line with their assessment. In the Nov. 1 general elections, 48,537,201 people out of the total 56,949,009 registered voters went to the ballot boxes, resulting in a landslide victory for the Justice and Development Party (AK Party) with 49.5 percent of the vote. Announcing their preliminary findings, the group stated a total of 195,606 reports transmitted from volunteers and political parties through their system have been compared with the official results.

"When comparing the findings to the official results, we have found that there were almost 10,000 (0.02 percent) irregularities out of nearly 48 million votes cast throughout Turkey. These irregularities will not affect the final result and are less than what was found in the June 7 general elections," Vote and Beyond's statement said.

Furthermore, the head of the international election observer delegation of the Parliamentary Assembly of the Council of Europe (PACE), Andreas Gross, said there is no sign the election results were manipulated. Speaking to journalists in Ankara on Tuesday, Gross said that there were a large number of small polling stations and about 1 million people worked during the election. "You can't manipulate so many people easily," he said.

Following the Nov. 1 elections, the Organization for Security and Co-operation in Europe (OSCE), the Office for Democratic Institutions and Human Rights (ODIHR), the OSCE Parliamentary Assembly (OSCE PA) and PACE announced their preliminary findings in which they said that the elections were professional and well organized. The assessments by the observers further contended that the Supreme Election Board (YSK) met all of the election deadlines.

At a press briefing on Monday, Ambassador Geert-Hinrich Ahrens, the head of the OSCE/ODIHR Limited Election Observation Mission (LEOM), thanked the government and election institutions for their participation before saying that even though there were positive elements from their findings, there were also shortcomings. Though the OSCE report said that most candidates were able to convey their messages to the electorate, OSCE observers underlined that fear and violence had restricted some candidates' ability to campaign freely due to threats by the PKK terrorist organization and increased terror attacks. The preliminary findings also noted that the freedom to campaign in any language, which was guaranteed by law in 2014 by the Justice and Development Party (AK Party) government, was as a positive step.

The OSCE delegation underlined that despite the shortened election calendar, the YSK was able to meet all of the deadlines. Regarding the candidate profiles, the report said that "the candidate registration was inclusive, offering voters a diverse and genuine choice." Overall, there were 8,426 candidates from the lists of 16 political parties and 21 independent candidates registered for the elections.
RELATED TOPICS