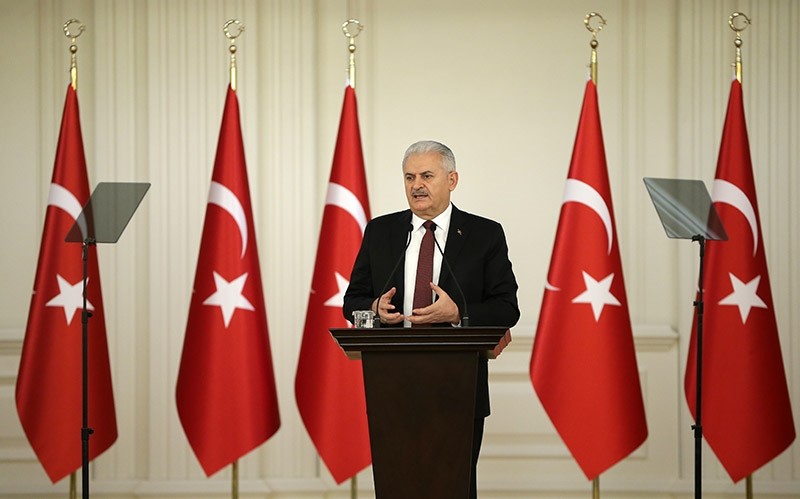 Prime Minister Binali Yıldırım stated Tuesday that Turkey's Supreme Election Board (YSK) will announce the date for the presidential system referendum date within this week.

Speaking at a meeting with the provincial chairs of the ruling Justice and Development Party (AK Party) in Ankara, Yıldırım said that the date would likely be within the first half of April, at a convenient date up until the 20th.

Yıldırım dismissed the opposition's reactions against the constitutional amendent package including a switch to the presidential system, saying that what is taking place is a system change rather than regime change, as has been claimed.

Arguing that the parliament's powers are increasing in reality, Yıldırım said that since the new system allows both the president and the parliament to determine members of the higher judicial institutions, the judiciary will also have a more neutral and effective nature.

"Currently the parliament does exactly what the ruling party wants, we shouldn't deceive each other. But in the new system and the Parliament's new entity, each deputy will be able to propose bills, defend them, turn them into laws. The powers of deputies are increasing, [the new system] allows more time for deputies to have for the country's problems," Yıldırım said.

Yıldırım said that the AK Party's referendum campaign will be carried in coordination with President Recep Tayyip Erdoğan and the party will not carry out a joint campaign with the Nationalist Movement Party (MHP), which prepared the draft amendments with the AK Party and helped amendments to reach the 330-deputy threshold for them to be brought before the public in a referendum.

The prime minister said the proposed new system would strengthen Turkey politically and economically and increase its international influence. He rejected opposition claims that it amounted to a change of regime.

He said Erdoğan's strong leadership had boosted its regional profile. "While Turkey was excluded from Syria negotiations one year ago, now the country sits in a leading position," he said.

With Russia, Turkey helped broker a cease-fire in Syria and peace negotiations between the warring sides on Monday and Tuesday.

In a wide-ranging speech, Yıldırım added that the military operation in northern Syria backed by Turkish troops would give Syrian refugees in Turkey the security to return home.

"The main goal of Operation Euphrates Shield is to clear terrorist groups from the region and ensure a secure place for our Syrian brothers," he said.

The premier added: "We host them in their difficult days but after providing security and peace in Syria they will return to their homeland."

Turning to east and southeast Turkey, parts of which have been affected by PKK terrorism, Yıldırım called for extra investment and promised government support through infrastructure projects.

The package of 18 constitutional changes that was passed by parliament last weekend is yet to be submitted to Erdoğan for approval, Yıldırım said.

"If he approves the amendment, the referendum could be held in the first half of April," he said.

The referendum must be held on the first Sunday that falls 60 days after a notification is published in the Official Gazette. Such a notification will come once the bill is approved by Erdoğan -- making April 2 the likeliest date.

The changes effectively shift Turkey from a parliamentary system to a presidential one by making the president the head of the executive and abolishing the prime minister's role.

The reforms also allow the president to be a party leader, call elections, declare a state of emergency and issue legally-binding decrees.

If passed, they will come into effect when presidential and parliamentary elections are held in November 2019.