PM Yıldırım: Turkey’s democratization process to be crowned with the referendum 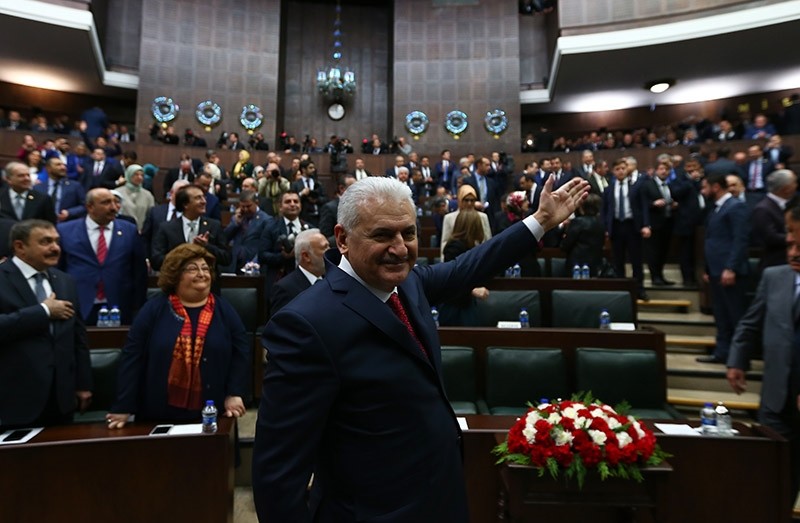 During the Justice and Development Party's (AK Party) parliamentary group meeting on Tuesday Prime Minister Binali Yıldırım underscored that the democratization process in Turkey will be crowned with the referendum on April 16 to make the proposed the changes in the constitution.

While Turkey marked a historic moment in its democratization process with a referendum in 2007, allowing the president to be elected for the first time in Turkish history by popular vote instead of parliamentary decision, Prime Minister Yıldırım underlined that the democratization process that began in 2007 is to be "crowned" with the referendum for a constitutional amendment on April 16.

"Turkish citizens are to go to the ballot box on April 16 and change the country's current coup-produced Constitution."

Prime Minister Yıldırım spoke following the Supreme Election Board's (YSK) announcement of the official schedule for the upcoming referendum on the government-proposed switch to a presidential system.

Addressing a large crowd at the AK Party's weekly parliamentary group meeting, Yıldırım referred to the current Constitution as a product of the 1980 military coup and said, "The current Constitution doesn't meet the expectations of the citizens. The Constitution is a 1982 model. It's stuck in the road. It's misfiring… On April 16, citizens will go to the ballot boxes and change the coup-produced constitution."

Since the start of the constitutional amendment talks, the main opposition Republican People's Party (CHP) and the pro-PKK Peoples' Democratic Party (HDP) have shared a similar stance against the amendment, a viewpoint also shared by terror groups like the PKK and the Gülenist Terror Group (FETÖ).

As the CHP and pro-PKK HDP are expected to vote "No" in the upcoming referendum, Yıldırım has often called on the main opposition CHP, advising them against siding with terror groups and "getting in the same boat as the HDP."

Once more in his statements on Tuesday, the prime minister criticized the CHP for their position and added that, "If there is 'no' propaganda by the terror groups then that propaganda is a sign and we must remind them of that."

He also said, "My citizens will not be on the same side as those terror groups saying 'no' [in the referendum vote]. I do not think that there is one citizen in our country that follows the same road as the terror groups."

"Our citizens are saying 'yes' but FETÖ, the PKK and HDP are saying 'no.' But what can you make of the main opposition party's position? The CHP's official policy is to oppose whatever the AK Party says. The CHP very well knows that Parliament will not be abolished [with the constitutional amendment]… We have gone a great distance in Turkey's road map but we are not done. We will remove terror from the country's agenda," Yıldırım said.

Meanwhile, CHP Chairman Kemal Kılıçdaroğlu also announced on Tuesday that the party will not appeal the constitutional amendment package, which includes the presidential system reform, in the Constitutional Court.

Responding to Kılıçdaroğlu's remarks, Prime Minister Yıldırım said, "The CHP probably realized that they will not get any result from the Constitutional Court."