Dissidents in MHP launch ‘No’ campaign with meeting in Ankara 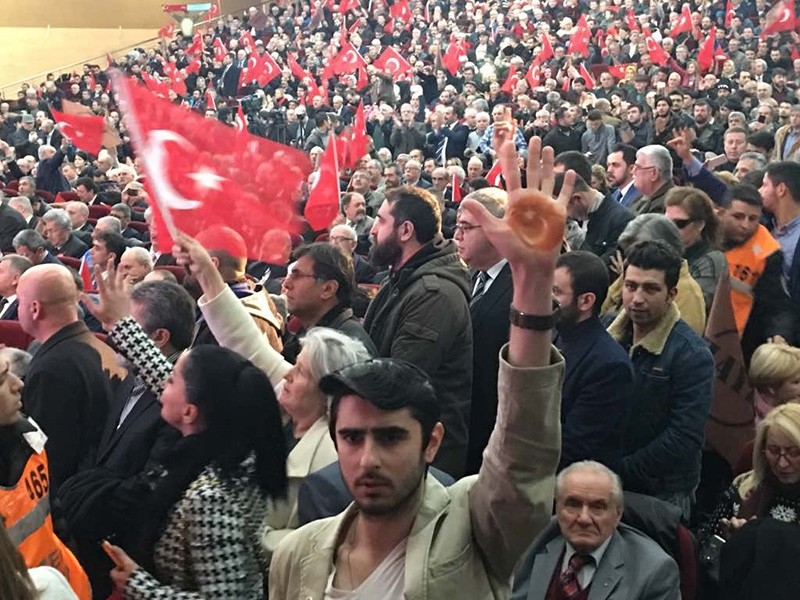 Prominent figures from the intra-party opposition of the Nationalist Movement Party (MHP) gathered in a meeting in capital Ankara to determine the campaign strategy for the April 16 referendum, in which the constitutional amendment package including a switch to the presidential system will be voted.

Hundreds of attendees to the meeting included current and former deputies and provincial chairs who have declared their opposition to MHP Chairman Devlet Bahçeli, in addition to figures from the party's quasi-youth branch the Grey Wolves (Ülkü Ocakları).

In addition to MHP-linked figures, minor center-right and right-wing parties leaning "No" in the referendum, such as the Felicity Party (SP), Great Union Party (BBP), Homeland Party (YP), Democrat Party (DP) and Liberal Democratic Party (LDP), were also invited to the meeting.

They have announced that they will vote no in the upcoming referendum on a possible switch to presidential system, which was agreed by the ruling Justice and Development Party (AK Party) and MHP administration. The support of MHP's voter base and field organization to the proposed system remains ambiguous and will be one of the key determinants of the outcome on April 16.

The revolt among MHP members was sparked by the November 2015 general election, where the MHP narrowly got into parliament and won the least number of seats among all parliament's parties, - just 40 out of 550 compared to 80 in June 2015 elections - even falling behind their arch rival pro-Kurdish Peoples' Democratic Party (HDP) in terms of seats. The party dismissed former deputy parliament speaker and chairman candidate Meral Akşener in September 2016 and incumbent Gaziantep deputy Ümit Özdağ in November.

MHP dissidents Akşener, Oğan, Özdağ and Aydın, backed by a significant number of party delegates and provincial heads, have been fighting to remove Chairman Devlet Bahçeli, who has led the MHP for nearly 20 years. The dissidents tried to call a party congress last year, but they were blocked by the leadership.