Regardless of referendum result, Turkey utterly committed to democracy 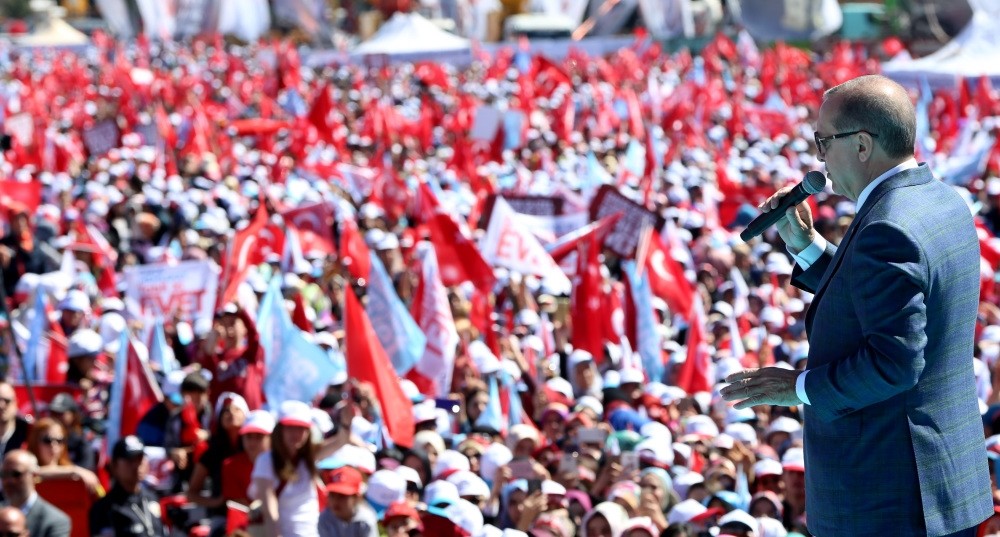 President Erdou011fan addressed hundreds of thousands of citizens in the capital city of Ankara.
by Merve Aydoğan Apr 03, 2017 12:00 am

President Recep Tayyip Erdoğan said regardless of the result and voters' 'yes' or 'no' choices in the referendum, Turkey embraces all of its citizens and remains committed to democracy, stressing that people should remember that terrorist groups, including the PKK and FETÖ, are working hard for a 'no' outcome

With only two weeks left until the critical referendum on a constitutional amendment package that will change Turkey's parliamentary system to a presidential one, President Recep Tayyip Erdoğan addressed hundreds of thousands of citizens in the capital city of Ankara yesterday, emphasizing that regardless of the outcome of the upcoming referendum for constitutional change, Turkey remains entirely committed to democracy.

On the other hand, the president urged voters to consider that all the terrorist groups including the PKK and the Gülenist Terror Group (FETÖ) are working hard to garner support for the "no" result in the referendum while casting their votes. President Erdoğan and Prime Minister Binali Yıldırım were welcomed by hundreds of thousands of citizens gathering in Ankara as part of the "yes" referendum campaign.

The gathering, which was tightly secured while food and beverages were distributed to citizens, began with the Justice and Development Party's (AK Party) "Vote Yes" songs and continued with statements from the Ankara mayor and governor in an opening ceremony. Despite a large crowd of attendees, including elderly to youth, an exclusive area for those disabled was provided with medics throughout the entire gathering area.

After a brief speech given by the prime minister, President Erdoğan took the stage and called on some EU member states, saying, "You will not turn the tables for April 16 by banning our politicians from going to Europe [to meet the expat Turks there]." He further touched on the EU's negligence for not approving Turkey's EU membership bid for 54 years and described the EU as "the Crusade's alliance."

Erdoğan also reiterated the threat of "no-bloc" members, referring to the Qandil Mountains (the headquarters of the PKK terrorist organization) and the Gülenist Terror Group (FETÖ) as he further noted that "Those saying 'no' are as respectable as those saying 'yes;' however, it is our duty to warn them [of the situation]."

On March 23, a female PKK senior, Evindar Ararat, said in a televised interview with the Fırat news agency (ANF) that a win for the "yes" camp would deal a major blow to the outlawed PKK terrorist organization.

She also said they will carry out some heavy campaigning in favor of the "no" vote, claiming that the PKK must say "no" in order to "stop the existing regime" in Turkey. 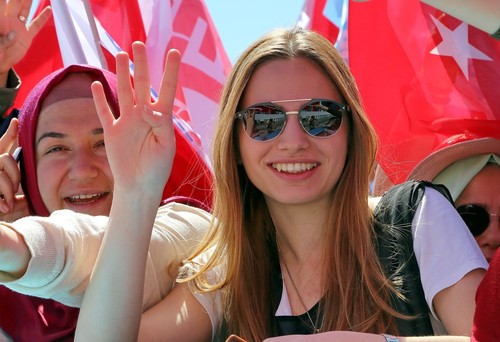 Erdoğan also urged people to give the best lesson to some EU member states that have taken a stance against Turkey on the referendum day saying, "As April 16 is approaching, 80 million Turkish citizens will hopefully give the best lesson to all Western leaders on that day." Erdoğan went on to criticize the controversial placards in Switzerland that read "Kill Erdoğan" under a photo of a handgun pointed to President Erdoğan's head.

Last month, sympathizers of the outlawed PKK terrorist organization held a rally in the Swiss capital of Bern where attendees held placards that read "Kill Erdoğan," under a picture of Erdoğan with a handgun pointed to his head.

Underlining that the racist, anti-Islamic and anti-Turkish stance of European countries must be overcome, Erdoğan said: "The constitutional amendment that will be voted for on April 16 will allow us to easier combat against these [xenophobic, anti-Islamic, anti-Turkish positions]." Adding on to his remarks by drawing attention to Turkey's recent 2.9 percent growth rate in 2016, President Erdoğan emphasized once more that the new system will further enhance the country's economy and democracy toward a better future.

Although the system change in Turkey has become the country's hottest topic since the 2014 presidential elections, the president told the crowd that the proposed change of governance is one that was desired by previous Turkish politicians. Furthermore, vowing that FETÖ will never gain grounds in the country again, he also affirmed that "Terror will be stopped no matter what the cost." Pointing to coalition governments, coup periods and the instability of previous Turkish governments, President Erdoğan underlined that the new governing system will put an end to possible instability, coalitions and tutelages in Turkey.
Last Update: Apr 03, 2017 9:05 am
RELATED TOPICS