More than 60 pct of Turks back changes in Constitution 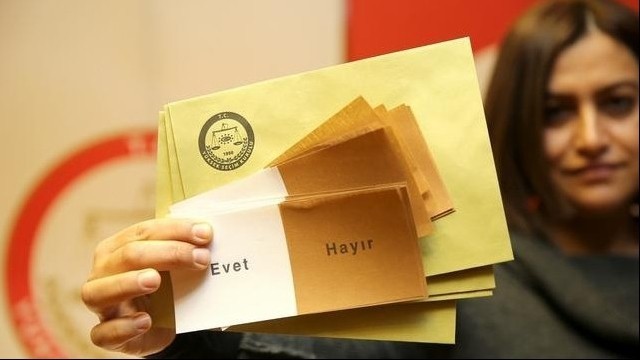 by Daily Sabah Apr 05, 2017 12:00 am
As the April 16 referendum for constitutional reform that includes a change to Turkey's governmental system nears, the U.K.-based survey company Qriously has announced that 61.4 percent of participants will likely say "Yes" to the proposed reform, compared to 38.6 percent for the "no" campaign when the percentage of undecided voters is equally distributed.

On the other hand, the survey, conducted in March via the smartphone application Qriously with 3,418 participating adults, indicated that 29 percent of the Turkish nation remains undecided, revealing that 43.6 percent of undecided voters leave towards the "yes" campaign and 27.4 percent lean towards the "no" vote.

The survey also revealed that more than 82 percent of "Yes" votes will likely come from supporters of the Justice and Development Party (AK Party) compared to 8.7 percent "Yes" supporters from the Nationalist Movement Party (MHP) and 3 percent from the main opposition Republican People's Party (CHP).

According to the survey, the majority of "Yes" votes will likely come from the Black Sea region and the central Anatolian region while the rate of "no" votes increases in Turkey's Aegean region.

On the other hand, 68.4 percent of Kurdish voters in the southeastern Anatolia region, where the majority of voters tend to support the pro-PKK Peoples' Democratic Party (HDP) and initially opposed the referendum, are likely to vote "yes" in the referendum.Meanwhile, another survey conducted by the Ankara-based Objective Research Center (ORC) across three metropolitan areas including the provinces of Istanbul, Ankara and İzmir between March 30 and April 3 revealed that 4,500, 2,750 and 2,120 people are expected to vote in support of the referendum.

The ORC also indicated that the percentage of undecided voters is now between 4 percent and 5 percent. In addition, the support of Turkish citizens living abroad for the "yes" vote is expected to be more than 70 percent.
RELATED TOPICS