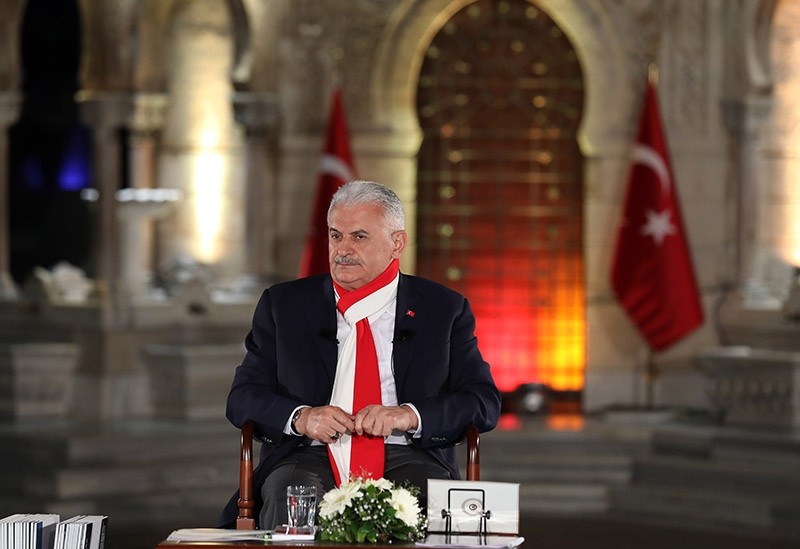 The proposed presidential system, which will be voted in the upcoming constitutional reform referendum on Apr. 16 clearly defines the seperation of powers and sets out the duties of the president and the parliament, Prime Minister Binali Yıldırım said on Wednesday.

Speaking at a live interview on Habertürk TV-Bloomberg HT with the participation of youth in Izmir, Yıldırım said that the new system enables citizens to hold both the parliament and the president accountable for their actions.

"The people give two types of authorization. Firstly, they tell the parliament that it is responsible for legislating, and checking the elected president, while they tell the president that s/he is responsible for administering the country and fulfilling pledges or reforms," Yıldırım said, adding that the new system clearly defines the duties and separation of powers.

Yıldırım continued by saying that the current system in Turkey does not have a solid separation of powers or checks and balances, as the government is able to have complete control over the parliament, and a government cannot be formed if there is no majority.

The new system also encourages building consensus, as both presidential and parliamentary elections will be held on the same day, and neither the president nor the parliament would favor it, Yıldırım noted.

Touching upon the issue of decrees, Yıldırım said that laws override decrees, and in case the president insists on a specific decree, the issue will be handled by the judiciary.

"There are judicial checks, and laws are superior to decrees," the premier said, noting that the president will not have the authority to issue decrees regarding fundemantal rights and freedoms in the proposed presidential system.

55.3 million people who are eligible to vote are expected to cast their votes for the constitutional reform referendum on April 16.

Constitutional changes have been discussed ever since Erdoğan was elected president in August 2014. The 18-article bill was passed by Parliament in January, with 339 votes in favor --nine more than needed to put the proposal to a referendum.

The reforms would hand wide-ranging executive powers to the president while abolishing the post of the prime minister. The president would also be allowed to keep his ties to a political party.

Other changes would see the minimum age for parliamentary candidates reduced to 18 while increasing the number of parliamentary deputies to 600. Under the proposed new constitution, simultaneous parliamentary and presidential elections would be held in November 2019 and the president-elect would serve for a five-year term.