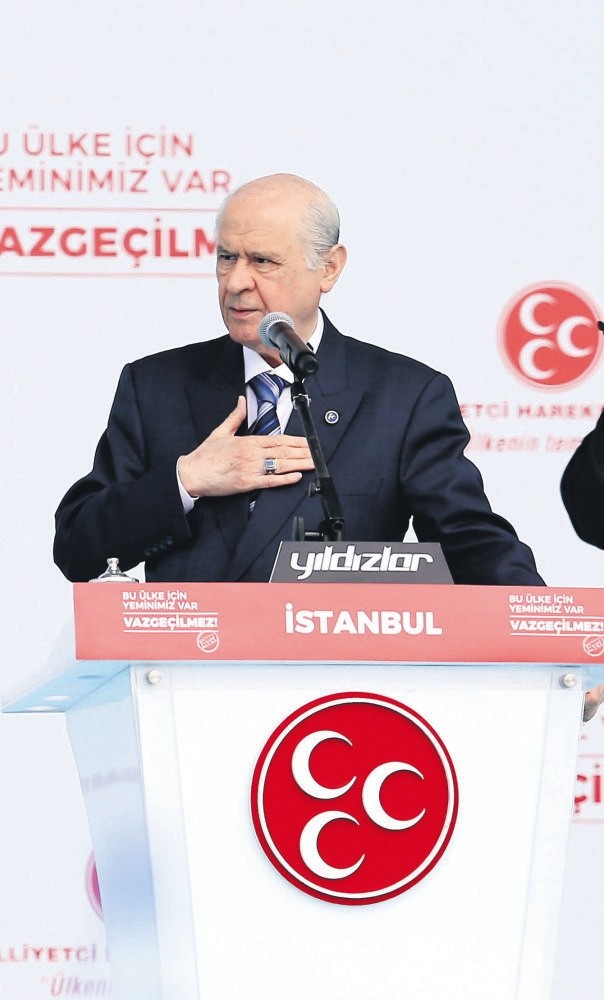 Bahu00e7eli addresses supporters during a rally for the upcoming referendum in Istanbul yesterday. (AA Photo)
by Daily Sabah Apr 10, 2017 12:00 am

Turkey will get rid of its roadblocks leading to a national awakening, solidarity and peace, Nationalist Movement Party (MHP) Chairman Devlet Bahçeli said at a rally in Istanbul on Sunday.

Addressing people at the Yenikapı activity area, Bahçeli said he wanted to "awaken the soul of Yenikapı Aug. 7," referring to the large-scale event that was held in Yenikapı in the aftermath of the July 15 coup attempt. At the rally, he said, "There are many wishes, dreams and ideals that can only be achieved together.

"If we stay together, we can achieve some results. We should be united. We cannot give an opportunity to those waiting for us to break apart. We cannot overlook those wishing to divide us. We cannot keep silent against those trying to destroy us.

Because we have made a vow to this country, it is irreplaceable. We have things to do for the Turkish nation that cannot be neglected. We have a claim for Turkey that cannot be postponed. A vow needs to be kept. If we make a promise, we won't forget it. When we make a vow, we erase our defeats. Turkishness is our vow, national prosperity is our vow and independence is our vow. We won't give up on our vow," he said.

The MHP proposed drafting the constitutional changes with the Justice and Development Party (AK Party) following the July 15 coup attempt, which passed through Parliament with support from AK Party and MHP deputies. He also stated that voting "yes" means that you are in, you are standing in the front lines, alive and undefeated. "I'm proud of my nation. I'm proud of you, proud of all our citizens. Whenever I see the will of the 'yes' campaign, I see that Turkey has a prosperous future. Istanbul says 'yes.'"

Bahçeli said that despite forces trying to break the nation apart, "yes" voters have "not collapsed and will not collapse." Bahçeli said he and his party will "continue on their path" and "do whatever their vow necessitates them to do." "We say 'yes' to the motherland, and they get scared," he said. "We say 'yes' to our flag and they are scared to death.