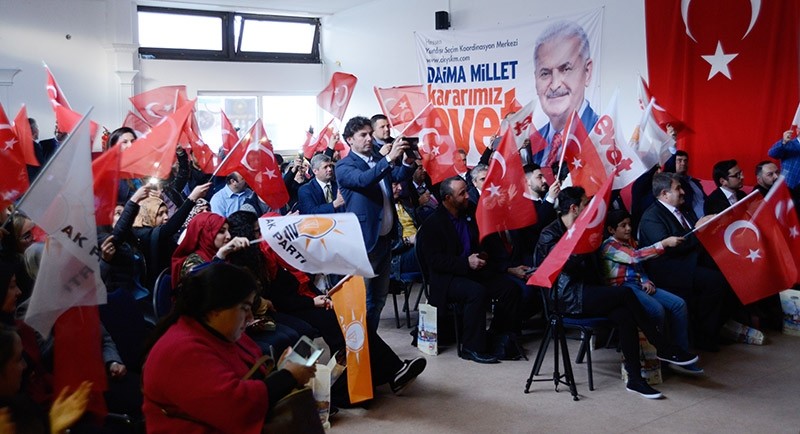 Mustafa Yeneroğlu, a member of parliament for Istanbul's AK Party, has issued a written statement declaring that Turkish voters living abroad strongly supported the referendum with a voter turnout of 48 percent, which, compared with the turnout of other diasporas could be considered a world record.

"To have such a high level of participation from abroad is gratifying both with regard to our country and the diaspora," he wrote in the statement. Yeneroğlu, who is also the head of the Coordination Center for Overseas Voting, said that the fact that 59% of votes at overseas polling stations were for the "Yes" vote, indicated high levels of support for the change to a presidential system.

The "Yes" campaign garnered 77 percent of the vote in Belgium, 73 percent in Austria, 71 percent in the Netherlands, 65 percent in France and 63 percent in Germany

The Turkish MP stressed that April 16 could be considered a milestone and that the transitionto a presidential system meant important future gains for Turkey. He added, "We have to embrace one another as a people which regards differences as [a kind of] wealth, we all have to concentrate together on strengthening democracy in our country and on enhancing its prosperity. Any of our citizens using his right to vote deserves our respect ... We all together are Turkey."

Yeneroğlu also pointed out the political pressure and obstruction that the Turkish referendum campaign experienced abroad and stated that, despite the setbacks in Europe, it had been a very successful electoral campaign, "The success that was achieved in spite of various unequalled practices directed against democracy, which we were confronted with especially in some European countries, is worthy of respect. I hope that the politicians of these countries, their academicians and journalists, have learned their lesson from the results [of the referendum]."