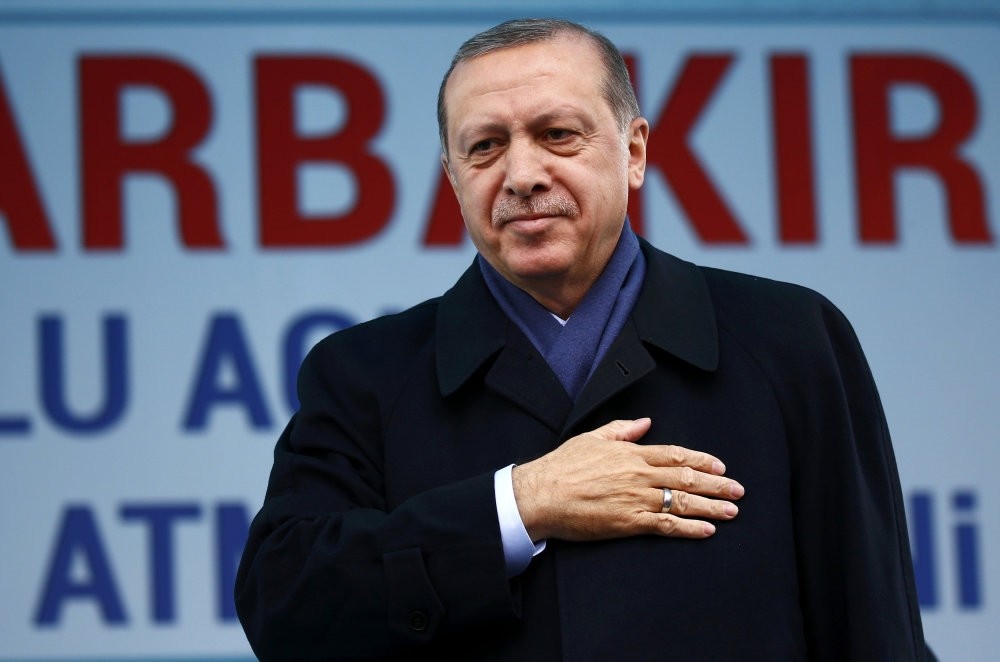 President Tayyip Erdou011fan greets his supporters during a rally for the referendum in the Kurdish-dominated southeastern city of Diyarbaku0131r, April 1.
by Merve Aydoğan Apr 18, 2017 12:00 am

Referendum data revealed that compared to the Nov. 1 general elections, there was a 10-20 percent increase in support for the ‘yes' front throughout the southeastern provinces of Turkey. Experts said this data may pave a way to a new era in Kurdish relations

Following Turkey's historic April 16 referendum, which resulted in a victory for the "yes" voters, prominent Kurdish experts emphasized that the outcome from Sunday night is the beginning of a new era in Kurdish relations. When the results from the critical referendum on the constitutional amendment is compared to the ruling Justice and Development Party's (AK Party) Nov. 1 results, it is evident that there is a 10-20 percent increase in AK Party support throughout the southeastern provinces of Turkey. On that note, President Recep Tayyip Erdoğan, speaking shortly after the referendum results on Sunday night, also drew attention to the increasing votes in favor of the change, while signaling a new era as he said: "When considering political parties' position in the referendum, we can see that there is a 10-20 percent increase in all of the southeastern provinces. Hopefully these results will be the herald of a beginning to a new era in our country."

Regardless of PKK terror threats and its political wing, the Peoples' Democratic Party (HDP), remaining in the "no bloc" throughout the referendum process, the predominantly Kurdish cities throughout the eastern and southeastern provinces of Turkey leaned toward "yes" on Sunday. For instance, in the southeastern province of Hakkari, the "yes" votes reached 32.5 percent displaying a strong increase of 18.7 percent in favor of the ruling AK Party compared to the votes from the November 2015 elections. This percentage is even higher when compared to the AK Party's votes from the July 7 elections, where it was at 22.8 percent. Another significant result came from the eastern province of Muş where the "yes" vote reached 50.8 percent, revealing a landslide of support for the AK Party, with a gain of 16.3 percent.

Furthermore, there were more than 450,000 votes in support of the AK Party in the cities of: Hakkari, Ağrı, Van, Şırnak, Bitlis, Siirt, Muş, Tunceli, Bingöl, Diyarbakır, Batman, Şanlıurfa and Mardin, an increase when compared to the Nov. 1 elections. Commenting on the matter, a Kurdish expert and associate professor at Dicle University Vahap Coşkun told Daily Sabah yesterday that the increased support for the AK Party is "highly significant."

Coşkun stated that the collaboration between the AK Party and the opposition Nationalist Movement Party (MHP) did not produce the expected results. He also noted that Kurdish votes in the region had strongly contributed to the general results from the referendum. "The results from the east and southeastern provinces will also shape the new era in the Kurdish matter," he added. Coşkun noted that the referendum is not the only determining factor for a new era in Kurdish relations, as he said the ongoing Syria crisis in which the PKK-affiliated People's Protection Units (YPG) continues to threaten Turkey at its border and the PKK not laying down arms are other determining factors. He further listed three reasons behind the increase in support to the AK Party, the first being the PKK-affiliate HDP no longer appealing to the Kurdish citizens in the region.

"The people of the region are still keeping their distance from the HDP, and the HDP is not establishing any policies to overcome this. Secondly, the Kurdish voters still believe that the AK Party is the most appropriate party for the sake of democracy and the Kurdish matter. Finally, the undecided voters of the region leaned toward the AK Party regardless of their disagreement," Coşkun said. He further added that the AK Party is expected to express more unifying statements in the new era. Similarly, Kurdish intellectual and analyst Vahdettin İnce also told Daily Sabah that the results from April 16 are a "destiny determiner."

Underlining that the result cannot be singularly explained, İnce stated that separating terrorist from the actual citizens of the region had influenced the results. Describing the results as "historical," Kurdish intellect İnce also said a new political era in the Kurdish matter is "inevitable." Though he did not describe this new era as a "Kurdish peace process" or "reconciliation process," Coşkun said it will be an era of "understanding the needs of the people and executing the proper policies."Meanwhile, the results from the referendum revealed a drop in participation by 7 percent in some of the provinces, such as Şırnak and Hakkari. Additionally, the votes have revealed a strong decrease in support to the pro-HDP party, especially in Diyabakır, which is viewed as the fortress of the HDP.
RELATED TOPICS