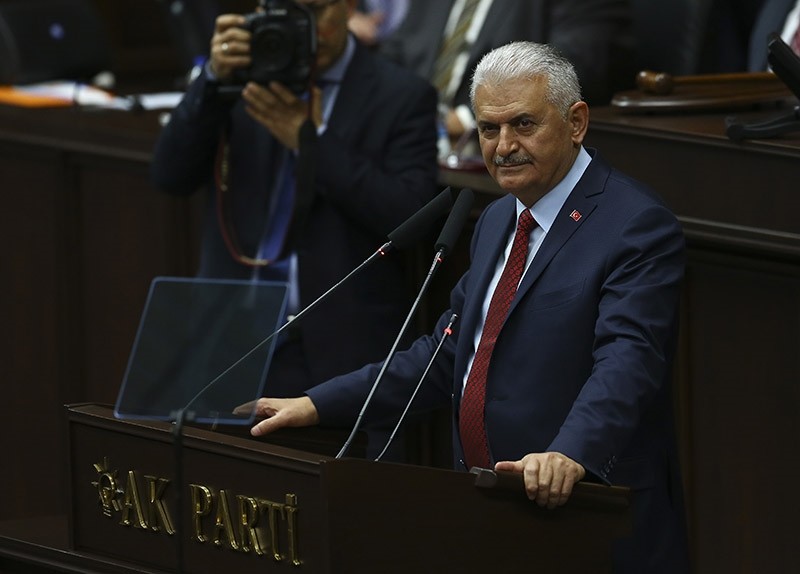 Parliament opened its doors yesterday after a brief break during the constitutional amendment referendum process as the ruling Justice and Development Party (AK Party) held its first weekly group meeting.

During the meeting, Prime Minister Binali Yıldırım said that "the results [of the referendum] are the beginning of a new era [in Turkish politics]" and emphasized the necessity for unity and solidarity in the country as a whole.

As Sunday's referendum resulted in a 51.41 percent victory for the "yes" campaign while heralding the adoption of an 18-article bill that includes provisions for an executive presidency, Prime Minister Yıldırım urged the main opposition to respect the will of the people.

"We have turned a new page in our political history. With the result from the ballots, our people and Turkey has won. This result is a beginning of a new era. Not only did the supporters of 'yes' win but so did our citizens who chose to support 'no' on April 16th… No one is a loser in this election. There is no difference in the percentage of 'yes' votes from Bayburt and the 'no' votes from Tunceli. They have both won," Yıldırım said.

The prime minister underlined that Turkey is to now move forward and called on his party members to "get to work."

Millions of Turks voted this past Sunday on wide-ranging reforms to the Constitution that are to usher in an executive presidency. Unofficial results showed the "yes" camp gained 51.41 percent of the popular vote while the "no" camp garnered 48.59 percent.

"Our people claimed democracy by going to the ballots. I thank all of our citizens who went to vote both at home and abroad," Yıldırım said as he affirmed that Turkey has turned a new page in its political history.

Though it is expected that a cabinet reshuffle is very likely to take place in the coming weeks according to AK Party sources, Yıldırım's remarks at the parliamentary group meeting was rather confirmatory to the restructuring for the AK Party.

The prime minister called on his party members and other political parties to rejuvenate themselves as he noted, "Through the referendum, a new page has been turned in our political history. I wholeheartedly believe that this new page promises a wonderful future for our country, people and our political life."

Touching upon the referendum campaigning process, Yıldırım said, "We have gone through a highly busy campaigning era and we may have said unintentional things. The 'yes' supporters and 'no' supporters may have upset each other but now we must put behind any fault aside and walk hand-in-hand with each other to build the future of our country and our people."

Continuing his remarks by urging unity as a country, the prime minister affirmed that the AK Party is to protect the rights of all citizens without exception.

"We will reject any kind of discrimination… The debates and discussions are rather the salt and pepper of all election campaigns. However, the people have now decided. What is left for us to do from now on is to spend our effort and energy toward establishing a more stable country," Yıldırım said.

He also announced that the AK Party will invite President Recep Tayyip Erdoğan to join the party after the official results of the referendum are announced and published.

"The AK Party will invite its founding chairman [President Erdoğan] to re-join the party when the official results are announced," Yıldırım said.