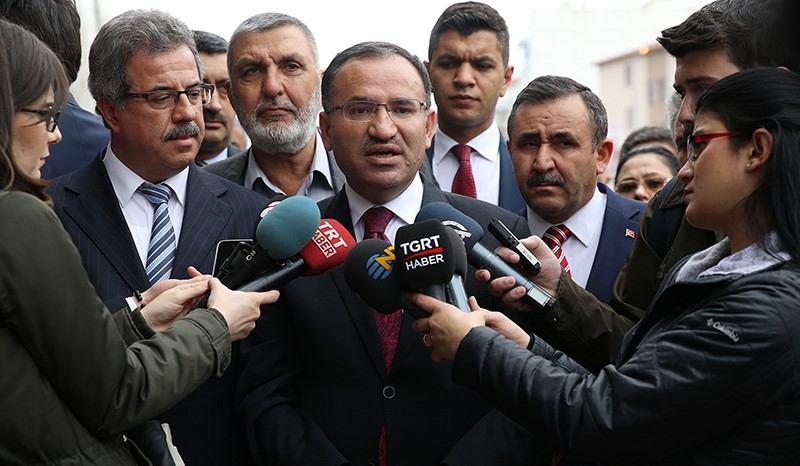 Speaking on A Haber channel, Bozdağ said that the CHP's stance regarding the results of constitutional reform referendum is problematic for a number of reasons.

Bozdağ said that in 2015 elections the party had appealed to the local election committee to accept unstamped ballots as valid, but now they claim unstamped ballots are invalid. He noted that the YSK had made the final decision based on previous rulings, which respect the will of the people.

An official report signed by ballot box officials in Istanbul's Ümraniye district on April 16, 2017 shows that CHP and Peoples' Democratic Party (HDP) members, Hasan Çelik and Olcay Emir respectively, accepted that the ballots were not stamped but they were indeed authentic.

The report indicates that 48 ballots in ballot-box numbered 3017 were unstamped.

"We have unanimously agreed on the validity of the [unstamped] ballots as there is no uncertainty regarding the voters' will," the report read, indicating that although the ballots were not stamped, they were indeed valid and represented the decision of the voters.

The YSK on Wednesday rejected appeals by main opposition Republican People's Party (CHP), the Peoples' Democratic Party (HDP) and the Patriotic Party (Vatan Partisi) to cancel the April 16 referendum over the debate on unstamped ballots, and a look at previous election decisions shows that this was not the first time. The board had previously accepted unstamped ballots as valid, upon necessary inquiry and investigation confirming the authenticity of ballots. Opposition parties, including the CHP had even appealed to the board in previous elections to count unstamped ballots as valid.

YSK's precedents also show that the board has declared unstamped ballots valid after inquiries confirmed the authenticity of ballots. For instance, in the 1984 local elections, the County Election Council in the town of Akçaalan in Kütahya province declared all votes without stamps were invalid, but the Social Democracy Party submitted a petition to deem the ballots valid. Upon investigating the request, the YSK said that there was no doubt about the authenticity of the unstamped ballots and that it was the Ballot Box Committee's mistake, ruling that the unstamped ballots are indeed valid.

In the 1994 local elections, ballot box committees in Ankara failed to stamp ballots and the County Election Council (CEC) declared that all votes cast with unstamped ballots were invalid, upon objection by the True Path Party. Two applicants then appealed the results to the YSK, which then announced that the aforementioned ballots were valid, in a decision saying that the purpose of Law No. 298 and Circular No. 138 is to prevent election fraud, but that the lack of stamps was the ballot box officials' fault and that an investigation has shown that the aforementioned ballots were indeed authentic. Also in 1994, a similar decision was made for the Salkım town in Nizip, Gaziantep.

In the 2004 local elections, a total of 145 ballots unstamped by the ballot box committee were also declared invalid in southern Mersin province and the opposition Nationalist Movement Party (MHP) submitted a petition to annul election results. However, the YSK ruled that the aforementioned ballots were valid and ordered a recount for the purpose of declaring the winner.

The minister also said that the CHP will not be able to get results if they appeal YSK's decision to the Constitutional Court or the European Court of Human Rights (ECtHR) as they do not have the jurisdiction to take care of the case.

"It can also apply to the ECtHR, but it cannot achieve a result there either, because the agreements Turkey signed do not give parties the right to apply" Bozdağ added.

He continued by saying that the CHP backtracked on withdrawing from the parliament after receiving criticism from the people and should respect the will of the people.

Bozdağ also criticized the Organization for Security and Co-operation in Europe for sending biased and prejudiced observers to monitor the elections.

He noted that some of the observers were affiliated with the PKK, which is recognized as a terrorist organization by the EU.