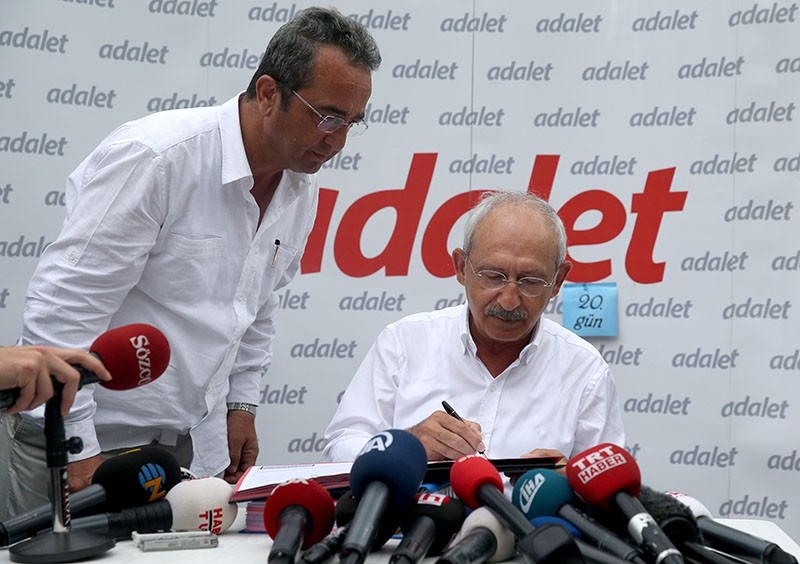 Kılıçdaroğlu signed a legal petition during a news conference held ahead of the 20th day his protest march from Ankara to Istanbul.

68-year-old Kılıçdaroğlu the 425-kilometer (265 miles) trek on June 15 following the jailing of CHP lawmaker Enis Berberoğlu who was sentenced to 25 years in prison for giving confidential information to a newspaper on the alleged transportation of Turkish arms to Syria in the controversial MİT trucks case. The march ends Friday.

On Tuesday, Kılıçdaroğlu said the April referendum was "illegitimate" due to a Turkish Supreme Election Board (YSK) decision to accept unsealed voting papers on the night of the vote.

"We have prepared our petition. We are applying to the European Court of Human Rights," Kılıçdaroğlu said, putting the first signature on the petition in the city of Izmit, around 100 km (62 miles) east of Istanbul.

Turkish voters narrowly endorsed an executive presidency in the April 16 referendum with 51.4 percent of the votes. The CHP had campaigned for a No vote.

The party has sharply criticized the conduct of the referendum, particularly the (YSK) decision.

However, Kılıçdaroğlu himself faced accusations from his own party that he failed to react strongly enough against the referendum outcome.

Following an unsuccessful appeal to the election board itself, the Council of State -- Turkey's highest administrative court -- rejected a CHP petition to annul the YSK's decision.

The party decided to apply to the Strasbourg-based court following unsuccessful appeals.