Bahçeli says election threshold too high, MHP does not back early elections 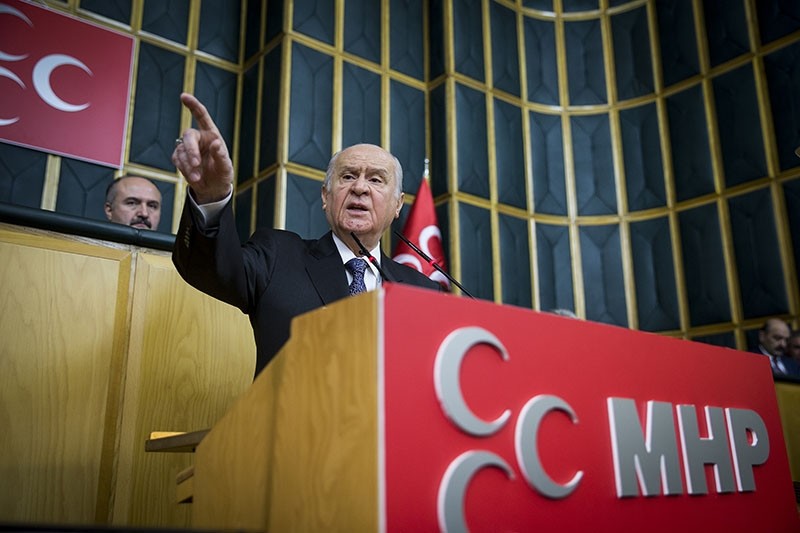 An unexpected remark from opposition Nationalist Movement Party (MHP) Chairman Devlet Bahçeli on Wednesday reignited a decades-old debate in Turkey's political arena as he called for the re-evaluation of the 10 percent national election threshold in contrast with the MHP's traditional stance.

Answering questions from reporters at his office in Parliament in Ankara, Bahçeli stated that the 10 percent threshold is too high for Turkey.

The 10 percent threshold, along with the highest averages method known as the D'Hondt method, were introduced with the 1982 Constitution, which was adopted in a referendum after the 1980 military coup. The main aim of the threshold was to prevent political instability as the former system of proportional representation introduced with the 1961 Constitution led to fragile coalition governments in the 1970's, and small or wing parties, including the MHP, gained cabinet powers far beyond their votes due to gruesome coalition bargaining.

Bahçeli said that they had been in favor of the threshold to prevent "secessionist elements" from being represented in Parliament in the past, but the threshold was exceeded many times through alliances or other methods.

The MHP chairman said that a study must be carried out to find a way to solve this issue in a democratic way and bring Turkey the stability and normalization period it needs. "Whether it would be 5 percent as it is the case in Western democracies, or 7 percent, or it remains as it is at 10 percent, we must consider these," Bahçeli said.

Bahçeli's remarks came as former MHP dissidents and other political figures officially launched their party in late October under the name Good Party (İyi Parti) in the leadership of former interior minister, deputy parliament speaker and MHP lawmaker Meral Akşener. Polling companies have released a number of election polls after the party's launch, with some showing the MHP under the election threshold.

Answering questions on election polls, Bahçeli said that they have not conducted any polls but that these polls were rather used to mold the public opinion instead of measuring people's reactions and choices.

"The MHP is one of the parties in the Turkish political arena that does not have a threshold issue," Bahçeli said.

Later in the day, Prime Minister Binali Yıldırım also answered a question about Bahçeli's remarks on the election threshold. "We will discuss and see what can be done. We do not promise to lower the threshold, but we will discuss the pros and cons of lowering it, and reach a decision," he said.

Main opposition Republican People's Party (CHP) Spokesman Bülent Tezcan also said that they think that an election should never exist, but if there is to be a threshold, then three percent is an agreeable number. Whereas CHP Group Chairman Özgür Özel claimed that Bahçeli made these comments since MHP's current votes are below the threshold, but they will continue to defend the removal of the threshold just as they did before.

"The CHP never was as ambitious in the past elections. It is perhaps receiving big support from some places, which is why it suddenly has this courage. If this courage is based on the 'justice march,' then there is no problem with that. But if it is from other places, we should think about it," he said, implying that the CHP was receiving support from third parties.

Bahçeli said that it would be better for the CHP to engage in dialogue with the government before making such issues public. "Other kind of opposition does not bear fruit, creates tension, fuels polarization and does not bring any benefits for the country," he noted. Especially after the July 15, 2016 coup attempt, the relations between the MHP and the ruling Justice and Development Party (AK Party) had improved and the two parties backed the "yes" vote in April 16 constitutional amendment referendum.

CHP Chairman Kemal Kılıçdaroğlu called for early elections as six mayors from the AK Party, including Istanbul, Ankara and Bursa, resigned from their posts in late October.

Decreasing the election threshold had been among the election promises of nearly every party in Turkey in the past, including the AK Party, however, it has not yet been realized to due to various reasons and excuses.

Despite the election threshold, the elections in 1991, 1995 and 1999 saw five parties taking seats in Parliament, causing an uninterrupted coalition government rule between various parties in the period between 1991 and 2002. During this period, Turkey saw nine governments formed by four different prime ministers, in addition to two major economic meltdowns in 1994 and 2001, hyperinflation and devaluations, a domestic migration influx from eastern regions of the country amid ceaseless terror attacks by the PKK and counter-terror operations, and a postmodern coup by the military in 1997 that forced the government to resign.

This tumultuous period was among the main reasons for the AK Party and President Recep Tayyip Erdoğan to propose the presidential system, which was also backed by the MHP and approved in a referendum on April 16 with 51.4 percent of votes.

Previous expert opinions suggested that since the presidency became the sole executive power with the constitutional amendment referendum, now it would be easier to lower the election threshold.

Whereas for pro-Kurdish or pro-PKK political parties, the solution to overcome the election threshold was independent candidates in eastern and southeastern provinces where the population is predominantly Kurdish. They manage to successfully apply this strategy in a larger scale in the 2007 and 2011 elections. Ahead of the 2015 elections, the Peace and Democracy Party (BDP), the latest of such parties, formed an alliance with several other far-left, liberal and green groups in the Peoples' Democratic Party (HDP), which managed to pass the threshold with 13.7 and 10.7 percent of the votes in the June 7 and November 1, 2015 elections, respectively.