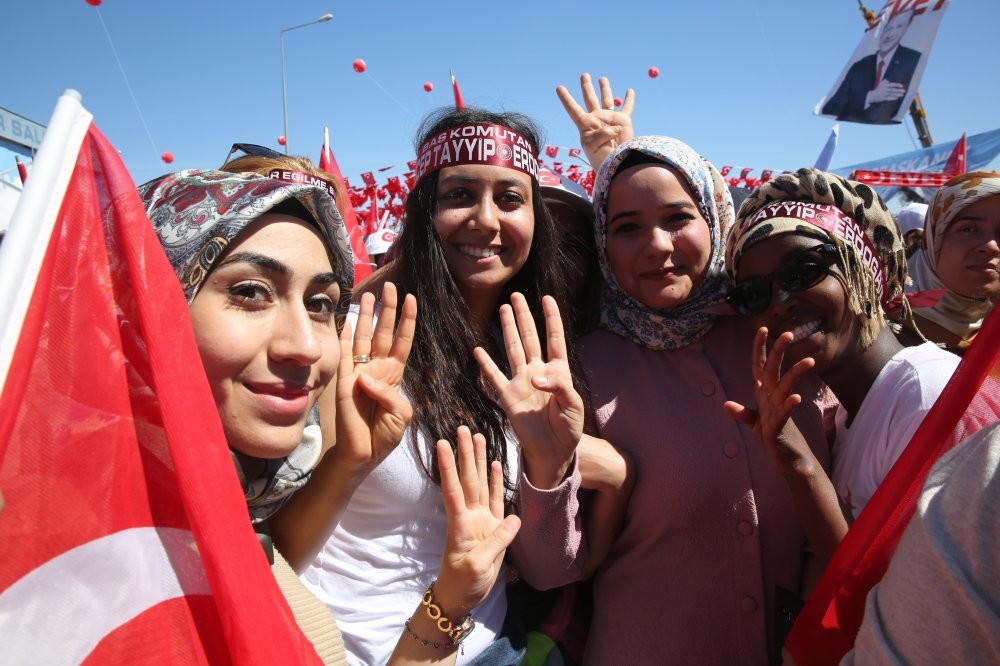 President Erdou011fan urged the AK party's women branch to continue carrying out favorable work more than ever.
by daily sabah
Nov 16, 2017 12:00 am

The women's branch of the AK Party will hold vital importance in the 2019 elections, President Erdoğan said, and therefore, women's role in the party will be increased, making up 30 percent of its local administrations

President Recep Tayyip Erdoğan has said that the Justice and Development Party's (AK Party) women branch will play a vital role in the 2019 presidential election.

Praising them for their efforts in a closed-door meeting held last week, President Erdoğan said, "I believe that our women's branch will shoulder us in the most correct way in the 2019 elections."

According to the party sources, he urged the party's women branch to continue carrying out favorable work, adding that the quality of services was as important as the number of services. "Quantity and quality should be merged," Erdoğan said.

Speaking to the AK Party deputies in a meeting on rejuvenation and alteration, Erdoğan said on Nov. 9 that the AK Party is a reformist party that can adapt itself to developments without wandering from national and moral values. Erdoğan explained the ruling party's perspective, saying: "I underline that the AK Party is a party that makes reforms, alters its structure and develops itself. ... It is not a status quo party." Erdoğan said the AK Party should update itself according to developments and be a party that faces challenges by upgrading its structure.The AK Party women's branch will hold a meeting on Dec. 5, on the 83th anniversary of the enfranchisement of women, where Erdoğan is also expected to deliver a speech.

The AK Party has re-elected Prime Minister Binali Yıldırım as its group president while also keeping its roster of group deputy chairmen unchanged.

Within the framework of the rejuvenation process, the AK Party brought some changes in its bureau of the assembly as Erdoğan Özegen and Ömer Serdar were replaced by Ceyda Bölünmez Çankırı and Bayram Özçelik as the party's Parliament authority and secretary member, respectively.