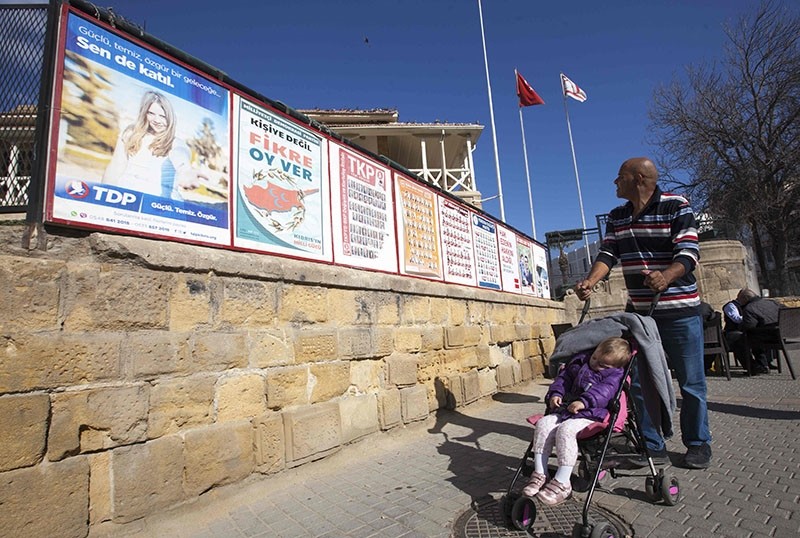 A man pushes a child in a push-cart past campaign posters for parliamentary elections in Nicosia, Turkish Republic of Northern Cyprus (TRNC), on Jan. 3, 2018. (AFP Photo)
by Sinan Öztürk Jan 05, 2018 12:00 am

As the electorate in Turkish Republic of Northern Cyprus (TRNC) heads for early general elections on Sunday, almost all indicators point to an extensive change with new parties, new leaders, new slogans and a new election discourse.

On Jan. 7, 190,551 voters will head to the ballot boxes to elect their 50 parliamentary deputies among 400 candidates from eight parties and nine independent candidates. An election threshold of 5 percent is in effect in the country, but polls project a very fragmented parliament could occur.

Muzaffer Şenel, a faculty member from Istanbul Şehir University, states that five to six parties are expected to pass the threshold, which would be a first in the island's history.

The first government was formed as a coalition between center-left CTP, led by Özkan Yorgancıoğlu, which won the elections by a wide margin, and center-right DP led by Serdar Denktaş, the son of the Turkish Cyprus's founding president, Rauf Denktaş, which split from the UBP in 1993.

The first round was tightly contested between incumbent Derviş Eroğlu, who was the former prime minister and former leader of the UBP, parliament Speaker Sibel Siber of the CTP, Mustafa Akıncı of the left-wing TDP and the TKP-YG, and independent Kudret Özersay, who served as a Turkish Cypriot representative in U.N.-backed Cyprus negotiations between 2002 and 2012, and later in 2014. All four candidates received votes over 20 percent, but Eroğlu and Akıncı managed to proceed to the second round with 28.1 and 26.9 percent of the vote, respectively. The second round saw veteran politician Akıncı, who led the northern section of Nicosia for 14 years between 1976 and 1990, but was mainly untested in larger roles, gathering 60.5 percent of the vote against Eroğlu, who served as prime minister for 17 years before his election to the presidency.

The main reason behind Akıncı's election, described as a surprise by many, was Turkish Cypriots' belief that he would be a more flexible negotiator facing Greek Cypriot President Nicos Anastasiades, another moderate, but the negotiations launched earlier in January 2017 proved fruitless and collapsed in July.

This development turned the public's attention more toward domestic issues. When Talat reassumed the CTP leadership in June and Serdar Denktaş resigned as deputy prime minister in May 2015, the CTP-DP coalition collapsed. A grand coalition between the CTP and the UBP, led by Özgürgün since 2013, was formed in July 2015 with the CTP's Ömer Kalyoncu as prime minister. However, this coalition was also short lived as the DP, dubbed the Turkish Cypriot kingmaker, agreed to form a coalition with the UBP in April 2016.

As a relatively young leader in a party of heavyweights such as Denktaş, Eroğlu and İrsen Küçük, the nephew of the first Turkish Cypriot communal leader, Dr. Fazıl Küçük, Özgürgün, was a symbol of change in the UBP. However, Özgürgün's term as prime minister was marked with allegations related to his personal wealth, which were mostly spread through Özgürgün's costly divorce from his wife, topped with affair allegations with İnci Pars, a Turkish model and actress. While Turkish Cyprus's daily politics do not get much coverage in Turkey, the divorce made headlines in Turkish media outlets.

Again for the first time, domestic politics are playing a bigger role in elections than the Cyprus question that has divided the island for more than 40 years. On Nov. 13, by a vote of 38-2, Turkish Cypriot parliament passed a motion greenlighting early elections amid allegations surrounding Prime Minister Hüseyin Özgürgün of the UBP. With the motion, general elections originally planned for July 2018 were moved up seven months to Jan. 7.

In the meantime, two new figures emerged in the opposition. Former chief negotiator Kudret Özersay, who surprisingly won 21.2 percent of the vote as an independent candidate in the presidential election, formed the centrist and liberal HP. The 44-year-old is a young figure promising change in Turkish Cypriot politics and transparency in government, which is embodied in the party's slogan: "A strong cadre, a clean past." It is widely expected that the HP, appealing to all parties' voter bases, will be the next key party after the elections.

Şenel explained that when snap elections became apparent in September, Özersay was leading opinion polls by a wide margin. "Around October, Özersay's HP was around 30 percent. When elections neared, voters, partly due to emotional ties, returned to their original parties. It is almost certain that the HP will be the third party, but it won't be a surprise if they finish second," Şenel said.

Şenel also noted that HP is appealing for all voter bases. "A poll asking the question 'which party would you never vote, 20 percent of the participants say they will never vote for the UBP, 35 percent for the CTP. Whereas this rate is only 3 percent for the HP," he said.

Whereas, Tufan Erhürman, a 48-year-old academic who also took part on the negotiations team during Mehmet Ali Talat's presidency, took over the CTP's leadership in November 2016. As majority leader in parliament, Erhürman was the primary proponent of an early election amid incidents involving Özgürgün. Furthermore, he and his political party will hold on inquiry against allegations about Özgürgün and his dubious implementation in the last government.

Şenel underlines that the academic backgrounds and technocratic teams of both Özersay and Erhürman are appealing for voters, however, they lack political charm and that would still be decisive in the polls.

The CTP has also built its campaign on change and hope, while many prominent figures in the party, including former prime ministers Özkan Yorgancıoğlu, Ömer Kalyoncu, Sibel Siber and Ferdi Sabit Soyer former announced they will not run in this election.

The TDP, a relatively small party faring just above the threshold, is also hopeful in these elections after Akıncı's election victory in 2015.

While Özgürgün did not back down from the snap election challenge and current estimates show that the UBP will likely emerge as the first party, it is not clear whether the UBP will be able to form a ruling coalition since currently only the DP is looking open for a partnership with the UBP. Reports suggest that the CTP, the HP and the TDP are already conducting talks for a coalition.

Şenel points out that due to the country's election system, Özgürgün might not be able to enter parliament even if his UBP finishes first.

Denktaş's DP, which has a swinging voter base with the UBP, is likely to pass the threshold due to its core voter base, but the current wind of change is likely to sweep a considerable portion of its 23.1 percent of the vote.

The Renaissance Party (YDP), which split from the DP, is also a newcomer in these elections. The party appeals to Turkish nationals living in the country.

The election campaigns of the political parties and their candidates still continue and are expected to end in Lefkoşa on Saturday afternoon.